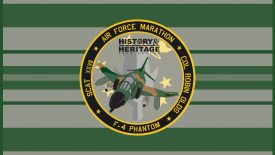 The upcoming event marks the third of six virtual races as the series returns for a second season.

While the Air Force Marathon, held annually the third Saturday in September, features aircraft still in service, the History & Heritage Race Series began in 2021 to highlight retired aircraft that gave wings to the Air Force’s legacy.

Smashing fifteen speed and performance records of its own, the U.S. Air Force sent its first F-4 Phantom IIs to Southeast Asia for air-to-air missions in 1965, four years after the fighter-bomber began service in the U.S. Navy. The F-4 typically flies around 600 mph and can carry twice as much as the B-17.

“It is a great privilege to feature the iconic F-4 Phantom II,” said Brandon Hough, Air Force Marathon director. “With nearly 5,200 units built and flown by the U.S. Air Force, Marine Corps, and Navy, it is the most produced American supersonic military aircraft in history. The Phantom II saw heavy use in Vietnam, where it was the principal air superiority fighter, and it was an instrumental aircraft throughout the Cold War.”

“In featuring this aircraft we also gave a nod to one of the most decorated U.S. fighter pilots, Brigadier General Robin Olds who had 17 confirmed aerial victories during his career, the last of which came in the F-4 Phantom II.”

The third race in the History & Heritage Series will begin May 1. Participants may run or walk the full marathon, half marathon, 10K or 5K distance wherever they’d like, track it with a GPS device to confirm their mileage and time, and upload their results.