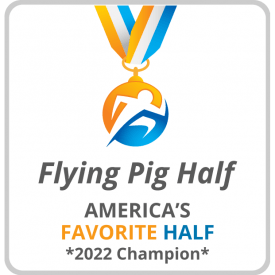 Los Angeles, CA (April 5, 2022)/ENDURANCE SPORTSWIRE/ – Squeal loud and proud Cincinnati, because your Flying Pig Paycor Half Marathon has captured the title of America’s Favorite Half Marathon for 2022 after bringing home the bacon in the fifth annual RaceRaves March Lunacy tournament.

To give avid runners a tournament of their own, RaceRaves in 2017 created a “March Madness for races” featuring 64 top U.S. road and trail events of all distances. This year the focus turned exclusively to half marathons, as races in four geographic regions were seeded based on the number of past finishers and their RaceRaves ratings & reviews, with defending champion The Cowtown earning the #1 overall seed.

Voting was conducted in six rounds over three weeks, with races that earned the most votes advancing to the next round. Runners from every U.S. state and several countries cast their votes for perennial heavyweights and overachieving underdogs.

But when the final buzzer sow-nded, a familiar favorite soared above the rest as the Flying Pig’s pork-ticularly passionate supporters propelled Ohio’s largest annual race weekend to its third championship in five years. The indomitable Pig “ham”strung opponents while holding off two tenacious National Parks challengers— the Great Smoky Mountains Half and Glacier Half—in the Final Four and championship, respectively. In so doing, the Pig capped a strong showing indicative of its Top Rated status on RaceRaves (4.8/5.0 rating across 425+ reviews).

Meanwhile, with its second Final Four appearance in three years, the Glacier Half likewise reaffirmed its reputation as one of the nation’s most beloved races, echoing its own Top Rated status on RaceRaves (4.9/5.0 rating across 50+ reviews). In addition, its parent company Vacation Races—which this year celebrates its 10th anniversary—placed three events in the Elite Eight, a tournament first and a testament to the excellence of the VR team and its portfolio.

“On behalf of the Flying Pig Marathon team we’re excited by this honor, and we’re grateful to all our supporters who voted us America’s Favorite Half Marathon and to RaceRaves for hosting this tournament,” said Iris Simpson Bush, President & CEO of Pig Works. “This award belongs to the entire Flying Pig family, and we invite all runners to join us in Cincinnati and experience the Pig for themselves as we look forward to producing another memorable event this May.”

Now in its 24th year, Flying Pig embraces the Queen City’s legacy as the one-time largest pork-producing city in the world, with start corrals known as “pig pens”, volunteers affectionately referred to as “grunts,” and a “finish swine” where finishers collect pig-themed swag. The energetic urban course starts and finishes in Cincinnati with a brief crossing of the Ohio River into Northern Kentucky. Along the way, unrivaled community support and frequent fun stations help runners conquer the rolling route.

Cincinnati Flying Pig Marathon Weekend takes place April 29–May 1, 2022 and offers a variety of distances for runners of all ages and skill levels, while the Glacier Half celebrates its fifth edition on June 25, 2022. Limited slots remain for both events.

“We’re thrilled to congratulate Flying Pig on its well-deserved win in our fifth annual March Lunacy tournament,” said RaceRaves Co-founder Mike Sohaskey, admitting his tireless team embraced the challenge of brainstorming new pig puns. “And we’re gratified once again to showcase the variety of first-class running events across the country, particularly coming on the heels of a challenging two years for the running community.”

The final March Lunacy bracket and tournament results can be found on RaceRaves.com.

Founded in 2014, RaceRaves.com is the leading online race finder and reviews community for runners around the world to share their experiences and find their next challenge. The company’s robust race database, intuitive search tools, finisher reviews from all 50 states and ~90 countries, and compelling editorial content establish RaceRaves as a trusted resource for runners and endurance athletes. With its authentic voice and fast-growing audience, RaceRaves helps brands and events resonate with runners of all levels. #ravinglunatic

View all Releases by Katie