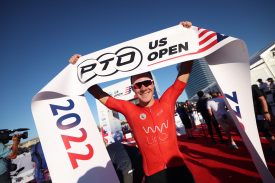 London /ENDURANCE SPORTSWIRE/ –  The Professional Triathletes Organisation (PTO) has announced a programming agreement with FOX Sports, to televise highlights of all PTO Tour races from its 2022 season across the USA next month.

The new deal, brokered by IMG, follows the success of the inaugural PTO Tour season this year and most notably the $1 million PTO US Open in Dallas (17-18 September), which saw incredible wins for American Collin Chartier and Australian Ashleigh Gentle in the men’s and women’s pro races respectively. Those races took place at a specially designed course in Las Colinas, where fans saw the athletes as many as 12 times during the 100km distance (2km Swim; 80km Bike; 18km Run) and were commentated on by special guest Michael Johnson, a Dallas native and four-time Olympic gold medal winner.

The full 2022 PTO Tour included: the $1 million PTO Canadian Open in Edmonton, Canada (23-24 July); the second edition of the $1.5 million Ryder Cup-style Collins Cup (August 20), which sees Team US take on Team Europe and Team International; and the first-ever PTO US Open. One hour highlights shows of three races will be shown together on FS1 on December 17 (11am-2pm Eastern Time).

“Getting the first PTO Tour season on FS1 is hugely important for us. Not least given the US is the birthplace of triathlon and a fast growing sport in the market amongst adults and youth,” said Tim Godfrey, PTO Chief Marketing Officer. “Triathletes are the ultimate endurance athletes and deserve broader recognition and appreciation, which this agreement will deliver across America. Putting their superhuman exploits and compelling storylines onto the screens of more sports fans.”

The PTO is a new sports body, co-owned by the sport’s professional athletes, and is seeking to grow the sport of triathlon and take it to the next level.

Commenting on the news, PTO World #8 and top ranked American male athlete, Sam Long – who finished third in the PTO US Open – said: “I’m a big supporter of what the PTO is doing. The first PTO US Open in Dallas was a great success; it was brilliant to have the opportunity to race in my home country. The PTO Tour more widely is a huge opportunity for our sport and having it shown on FS1 is a good example of that.”

Hillary Mandel, EVP and Head of Americas, Media at IMG said: “The PTO has huge commercial potential and is already successfully professionalizing the sport around its top-tier events, with best-in-class production and athlete-focused storytelling. This agreement will allow PTO to showcase its innovative formats and continue to grow the sport’s audience across one of its biggest markets.”

In 2023 and 2024, the PTO Tour plans to expand with thePTO European Open and the PTO Asian Open, alongside their US and Canadian equivalents, plus the Collins Cup.

About the Professional Triathletes Organisation (PTO)

The PTO is a new body co-owned by the professional triathletes, united in their desire to take the sport of triathlon to the next level. The inaugural PTO Tour race schedule for 2022 included: the first-ever PTO Canadian Open (July 23-24); the second edition of $1.5M Ryder Cup-style Collins Cup (August 20), which sees Team Europe take on Team USA and Team International; and the first PTO US Open (September 17-18). Each Open carried a minimum prize money of $1M and was raced over 100km (2km swim, 80km bike and 18km run). In 2023 and 2024, the PTO Tour plans to expand with the PTO European Open and the PTO Asian Open, alongside their US and Canadian equivalents and the Collins Cup.

IMG is a global leader in sports, fashion, events and media. The company manages some of the world’s greatest athletes and fashion icons; owns and operates hundreds of live events annually; and is a leading independent producer and distributor of sports and entertainment media. IMG also specializes in licensing, sports training and league development. IMG is a subsidiary of Endeavor, a global sports and entertainment company.