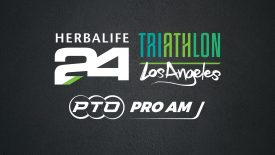 The new PTO Pro Am Series features Challenged Athletes competing alongside PTO Professionals and celebrities as part of a Celebrity Team Relay broadcast to a worldwide audience. The event will feature ten athletes from the Challenged Athletes Foundation (CAF) who will lead the swim leg of the triathlon, handing over to ten PTO Professional Triathletes who will complete the Triathlon, alongside 10 celebrity guests.

Garcia-Tolson and the Challenged Athletes Foundation have been in partnership since Rudy was just eight years old and today, Garcia-Tolson is a 5x Paralympian, 5x Paralympic medalist, and the first double-above knee amputee to complete an Ironman. Sewell is also a double above-knee amputee who was homeless for many of his childhood years and never considered sport until he was connected to The Challenged Athletes Foundation at the age of eight. He has competed in the U.S. Paralympic Swim Trials in both 2016 and 2020 and in 2019 he became the first double above knee amputee to finish the Ironman World Championship. He is also the first member of his family to graduate from college. Shepherd began life as an orphan in Vietnam who lost her legs, as well as her parents, in a family suicide attempt and qualified for her first Paralympic Games in Tokyo in 2020 with CAF’s support.

Sam Renouf, CEO of the PTO stated, “We are delighted to partner with Challenged Athletes Foundation for the first race in the new Pro Am series. CAF is an organization we have been involved with for some years that does inspiring work ensuring that individuals with physical challenges are empowered through sport. We have a stellar line up of CAF athletes, who, along with their PTO professionals and celebrity Pro Am teammates, will showcase their extraordinary talents to a global audience of endurance fans.”

Bob Babbitt, CAF Co-Founder stated, “At CAF we feel that people underestimate the Power of Sport to change lives for the better. Working with the PTO to connect the greatest triathletes on the planet with our amazing CAF athletes as well as celebrities is a dream come true. This event is going to be spectacular!”

The PTO Pro Am is part of the Herbalife24 Triathlon Los Angeles event and will also feature some of the world’s greatest PTO Professionals racing in the professional race for a $100,000 prize purse. This is in addition to age group races which include a sprint distance, an Aquabike international distance, a 22-mile Bike Tour, and a 5k Run/Walk that will traverse through the streets of Los Angeles.

“The partnerships with PTO and CAF elevate the overall event experience for all participants and we look forward to cheering on the athletes as they cross the Herbalife24 event finish line at the famed LA Live,” said Jennifer Guran, director of Sports Marketing and Alliances, Herbalife Nutrition, North America.

About the Professional Triathletes Organisation
The Professional Triathletes Organisation is a not-for-profit entity consisting of both men and women professional triathletes who have come together to form a representative body which not only gives them a meaningful voice in the way the sport operates but a means to contribute to its growth for the benefit of the entire triathlon community. The PTO seeks to showcase the passion, talents, determination, struggles and achievements of its dedicated professionals through iconic events, reimagined broadcast and compelling storytelling, inspiring global sports fans to watch, engage and participate in Triathlon.

The Challenged Athletes Foundation® (CAF) is a world leader in helping people with physical challenges lead active, healthy lifestyles. CAF believes that participation in physical activity at any level increases self-esteem, encourages independence and enhances quality of life. Since 1994, more than $134 million has been raised and over 35,000 funding requests from people with physical challenges in all 50 states and dozens of countries have been satisfied. Additionally, CAF’s outreach efforts impact another 60,000 individuals each year. Whether it’s a $2,500 grant for a handcycle, helping underwrite a carbon fiber running foot not covered by insurance, or arranging enthusiastic encouragement from a mentor who has triumphed over a similar challenge, CAF’s mission is clear: give opportunities and support to those with the desire to live active, athletic lifestyles. To learn more, visit challengedathletes.org or call 858-866-0959.