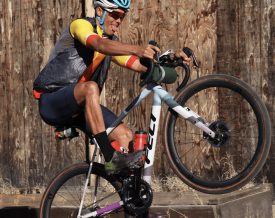 Rancho Santa Margarita, California (February 25, 2021)— Felt Bicycles is excited to announce the return of professional cyclist Travis McCabe to its stable of athletes, where he’ll focus on gravel races and other endurance events. McCabe was a rider on the then-named Holowesko Citadel pro cycling during the 2016 racing season, when the team competed aboard Felt race bikes. McCabe scored some incredible results during that season, including stage victories at the Tour of the Gila and Joe Martin Stage Race. He also notched one of the very first wins for Felt’s flagship FR road bike, accomplished in the platform’s racing debut at the Tour of Utah. McCabe continued racing professionally on the road through the 2020 season at the World Tour level, but as 2021 neared, he sought a new challenge.

“There were a number of factors that led to this transition from road racer to endurance athlete,” says McCabe. “COVID-19 hitting the world, quarantining, and falling in love all gave me a new outlook on life and what I wanted to accomplish as a human being. I truly love cycling and, after many years of tirelessly pursuing my dreams of racing at the World Tour, I was finally given the opportunity in 2020. But when the pandemic hit in March of that year, those dreams got a little derailed. As much of a bummer as that was, I was strangely at peace with it. After coming back home and spending so much time with my girlfriend and friends, and living a relatively ‘normal’ life, I had a bit of an awakening and realized how much I loved being home. I decided that I was no longer going to strictly race road bikes anymore. Fortunately, Felt reached out and has helped make the transition to an endurance athlete much easier.”

“We’re thrilled to have Travis back as a member of the Felt family,” says Eric Sakalowsky, Felt’s VP of Global Marketing. “He’s proven over the years to be a fierce competitor who can win big races. But, more importantly, he’s passionate about cycling and wants to extoll the virtues of bike racing in all its forms. His journey reflects that of Felt Bicycles, and we’re incredibly proud to have his insight from competing at the sport’s highest level to help us develop the next generation of road and gravel bikes.”

“It feels really great to be back on Felt bikes,” says McCabe. “It definitely brings back fond memories of racing for Felt back when I was for Holowesko Citadel in 2016. That was probably not only one of my most successful years, but hands down the best year I ever had racing. I loved racing on the AR and FR road bikes. But what excites me the most about connecting with Felt again is the opportunity to still race in the road and gravel scenes and connect with all the people taking the same grassroots approach to the sport that we all love.”

Since its founding in 1991 in Southern California, Felt Bicycles has strived to be the most innovative cycling company on the planet. Felt aims to help every cyclist and triathlete ascend to a world championship victory, surpass a personal record, or achieve a perfect ride on the parcours of their liking. The brand is devoted to creating the most high-performance cycling experience imaginable because it’s composed of the world’s most passionate cyclists who love nothing more than what bikes can bring to the human experience.