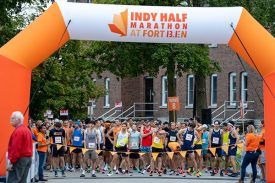 Over 2,000 Competitors Returned to the Indy Half Marathon at Fort Ben

LAWRENCE, IN – The 25th edition of the Indy Half Marathon at Fort Ben took place Saturday morning in Lawrence, IN. Competitors returned to a live start line for the 13.1-mile half marathon, 5K run, and Kids One Mile Run.

The race welcomed over 2,000 racers back to historic Fort Harrison, where the race winds through the state park and surrounding neighborhoods. In addition, over 300 Lawrence Township students graduated from the Apex Benefits Monumental Kids Movement program upon finishing the 5K race. These students received free entry upon completion of a seven-week running program. This program has expanded from 18 to 60 schools since 2013, and since 2016 the program includes 13 schools in MSD Lawrence Township.

The USA Track & Field Indiana Half Marathon Champions were also crowned at the event. The men’s division winner was Jordan Kyle in a time of 1:08.40, while the women’s champion was Taryn Thor in 1:24:25. Both racers also took the overall marathon titles for their divisions. Margaret Gudas came in at 23:11 to win the 5K women’s division with Brady Hall finishing first at 16:10 in the men’s division.

Racers joining the event in person saw a return of popular festivities after the races which included a post-race celebration featuring White Claw Hard Seltzer, Beyond Monumental’s official hard seltzer, local craft beer from Sun King Brewing, and pizza provided by Jockamo Upper Crust Pizza, the event’s official pizza partner. A new feature of the race was the “Kill the Hill” Challenge, which gave racers an extra chance to show off their speed climbing up the steepest hill on the course. Nuun Hydration, Beyond Monumental’s official hydration provider, and locally-based CLIF Bar Baking Co. provided on-course hydration and nutrition. Professionals from Athletico Physical Therapy, the event’s official physical therapy provider were on hand to help racers stretch pre and post-race and also provided injury assessment to those in need.

“We’re excited to continue the return to in-person racing,” said Jed Cornforth, executive director of Beyond Monumental, “We are continuously grateful for all of the support from the Lawrence Community, Volunteers and Participants in helping make this incredible event a success!”

Beyond Monumental’s main event, the CNO Financial Indianapolis Monumental Marathon, will have its 14th running this year on Saturday, November 6, 2021. Registration is open online.

Beyond Monumental provides the Indianapolis community with a complement of activities built around their premiere event that promotes healthy living & fitness for all ages. Beyond Monumental gives back to the Indianapolis community by supporting youth programming that reinforces healthy lifestyles for young people, with an emphasis on working with urban students and Indianapolis Public Schools, donating nearly $1.4 million in 13 years. The CNO Financial Indianapolis Monumental Marathon is a top 15 marathon in the US and is nationally recognized by Runners’ World as one of “Ten Great Marathons for First Timers”. The 14th annual running is scheduled for Nov. 6, 2021. www.beyondmonumental.org

View all Releases by Beyond Monumental