Pinarello US Introduces the Scuderia 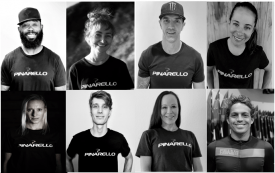 SOLANA BEACH, CA (February 10, 2021)– Pinarello US, the storied Italian bicycle brand, is pleased to announce the Scuderia Pinarello, a diverse team of US brand ambassadors. The Scuderia Pinarello, which means stable or team in Italian, includes eight unique athletes, ranging from an Olympic medalist to a gravel-racing champion, a big-wave surfer and a community cycling advocate.

“Our mission with the Scuderia is to welcome all people to discover their potential on a bike,” said Kim Rogers, Senior Marketing Manager at Pinarello. “We very intentionally selected a team of Ambassadors who represent a wide swath of the cycling spectrum and who are committed to helping motivate others to tap into the power of riding bikes.”

Scuderia members will collaborate with Pinarello to create inspiring stories and experiences aimed at increasing accessibility to cycling for all demographics and experience levels. They will represent the Scuderia at events such as Unbound Gravel, Transrockies Gravel Royale and The Last Best Ride. In addition to events, Pinarello will support each Scuderia member’s personal goals, projects and organizations to benefit their local cycling communities.

Pinarello (www.pinarello.com) was founded in 1952 and is a leading premium road bike, accessories and apparel brand. The company is known for its cutting-edge, Italian-designed road bikes for use by amateur and professional riders alike. Sold in over 50 countries worldwide, Pinarello’s products are clearly differentiated by advanced technology, uncompromising performance and beautiful style. A favorite of Grand Tour riders, Pinarello is currently partnering with Team Ineos Grenadiers and has provided bikes to 29 Grand Tour winners, including seven of the last eight Tour de France’s.