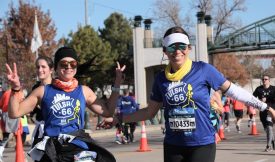 The Williams Route 66 Marathon in Tulsa, Oklahoma, announced a renewed collaboration with Pic2Go for taking photos of this year’s runners.

/ENDURANCE SPORTSWIRE/ – The Williams Route 66 Marathon in Tulsa, Oklahoma, announced a renewed collaboration with Pic2Go for taking photos of this year’s runners.

Pic2Go’s unique solution not only auto-tag and brand the marathon photos, but also deliver rich finisher galleries to the participants while driving massive social sharing – boosting reach and engagement for the race’s title sponsor.

Race organizers said key factors in their decision to again use Pic2Go to capture key racing moments included how easy the service is to use for runners and organizers, both, and that the photos are free to runners. Because Pic2Go makes social sharing easy, runners are able to share their experience running one of the country’s premier race events with those who are cheering them on virtually.

“We love seeing the photos runners share via Pic2Go on social media. Those photos share the atmosphere of our event and celebrate our runners, and every one of them helps generate more exposure for our title sponsor, Williams,” Destiny Green, executive director for the Williams Route 66 Marathon, said. “Plus,” she continued, “our runners love that they get free photos of themselves on race day with no lengthy searching through everyone else’s photos to find their own. It’s fast, easy, and free to our runners, and we love that.”

“We are excited to collaborate with The Williams Route 66 Marathon this year again!” says Eitan Hefetz – Pic2Go CEO. “After working with the event in 2019, it is great to have the in-person event taking place again and we can’t wait to have participants celebrating their accomplishment with their Pic2Go photos!”

For more information about The Williams Route 66 Marathon visit https://route66marathon.com/

View all Releases by Pic2Go Ltd.