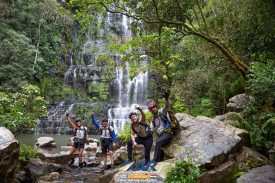 /ENDURANCE SPORTSWIRE/ – At the closing ceremony for the 2022 Adventure Racing World Championship, Race Director Gustavo Borgognon said, “Ten years ago I had a dream to bring the World Championship to Paraguay, to show my country to the world. People always asked me; ‘Where is Paraguay?’ and now I want you all to tell everyone about this country and how beautiful it is!”

His dream had been realised after establishing Expedición Guaraní, a World Series expedition race, which this year hosted the best adventure racing teams in the world on a 550km course. Fifty-three teams of 4 from 18 nations raced non-stop, trekking through some of the last remaining Atlantic rainforest, paddling fast flowing rivers and cycling country roads and dirt trails through small towns and villages. By the time they finished they had seen enough of Paraguay’s stunning scenery to become the ambassadors for his country that Borgognon wanted.

The race began with a 122km trek which included a climb to the highest point in Paraguay, Cerro Peró (842m). It was a trek which took the best teams in the world 28 hours to complete and those at the back of the race more than 3 full days and nights. Navigation through the dense forest on small trails in the night challenged all of the teams, and it was no surprise when Team Avaya from New Zealand came out of the stage in the lead.

The six time World Champions had been unable to race since their last win in 2018 on Reunion Island and the question was whether they would pick up where they left off. They arrived at the first transition point in the lead, expecting to set off on the next 94km kayaking stage, but were stopped for an hour time adjustment, having failed to complete a zip line during the trek. (This was a fun challenge for the teams, gliding high above the forest canopy past a cliff face and waterfall.)

By the time the hour had passed and Avaya were leaving, the next teams were arriving. These were the defending World Champions from in Spain last year, The Swedish Armed Forces Adventure Team (SAFAT), and current world #1 ranked team Estonian ACE Adventure – La Sportiva. Further back were the defending champions at Expedición Guarani, Team Brazil Multisport, who have won the race many times.

The race was expected to be between these teams and going into the second night they were racing close together. They were also paddling during a huge electrical storm, which started in the night and continued with intensely heavy rain for the next 12 hours. For the teams on the river there was the bonus of a faster flow to push them along, but stopping to rest wasn’t easy. (Most teams were still on the first trek during the storm.)

Avaya found a shelter on the riverside and tried to sleep for 3 hours, but team Captain Nathan Fa’avae said, “It wasn’t very restful. We thought we’d sleep well, but the thunder was so loud it was impossible to sleep!” Their rivals rested for less time, and by the end of the paddle, Avaya and SAFAT arrived together, with the Estonians not far behind.

Now the race switched to mountain biking, and teams were nervous about the condition of the dirt roads, where the red clay and sand notoriously turns into thick, sticky mud after heavy rain. Nick Gracie, a British racer competing with Brazil Multisport said, “The roads were surprisingly good after the rain and we were not slowed down too much.” Wheels, gears and brakes were still coated in thick mud, but with occasional cleans in the rivers, teams were able to make good progress.

The ride began with teams wading across the river they had paddled down, and included two waterfall checkpoints. Both are visitor attractions in Paraguay, and the first, Salto Cristal, is a broad curtain cascade in the forest reached after a scramble along a rocky path. Here one of the team had to swim under the cascade to collect a medallion, to be shown at the next transition.

The race now alternated between trekking in the hills and mountain biking, with more checkpoints at waterfalls hidden in the hills and forests, and one at the rusting shell of a cargo plane left out in the middle of the countryside. Avaya continued to move quickest, helped by the skill of their navigator, Chris Forne, who is recognised as the best in the world and was proving that once again. The time their rivals lost in navigational errors of an hour or two, Avaya used for another 3 hour sleep. SAFAT were racing with them, but had banked less sleep and the race was taking longer than planned.

Then Avaya left their race tracker behind during the second trek, incurring a 2 hour penalty which they would have to sit out before the final stage. They would need to regain those 2 hours in the final 30 hours of racing to stay ahead, but were confident of doing so. On the third trek they passed SAFAT, taking different routes to approach a checkpoint, and then opened up a significant lead on the last 104km ride, as both their rivals slowed significantly.

SAFAT and Estonian ACE Adventure – La Sportiva were now into their 4th day of racing with only around 3.5 hours sleep, and were about to pay the price for trying to outrace Avaya by sleeping less. The Kiwi team sat out their 2 hour penalty, sleeping for an hour before the last trek, then made their way to the finish, completing almost all of the difficult last stage in daylight.

They crossed the finish line in the town of Tobati shortly after nightfall at 18.43 to record a time of 102 hour 43 minutes 13 seconds, and take a 7th world title as a team. Regular team members Fa’avae, Forne, and Stu Lynch were racing for the first time with Simone Maier, who was a late addition to the team.

Despite this change, their recent lack of international competition, and the penalty, Avaya were dominant once again, and the bad news for the other teams was that Fa’avae said afterwards, “We didn’t really have a great race and it would have been disappointing to finish behind other teams knowing we could have done much better. In our previous 3 races we were really motoring, but we felt a bit rusty here and were not going at the speed we can.”

The team won $22,000 in prize money, and free entry to the 2023 Adventure Racing World Championship in South Africa next year. They were also presented with a Garmin Enduro 2 watch each, and these feature a special ‘Adventure Racing Mode’ so they can be used to record data in competition, but with the mapping features, which are not allowed in adventure racing, locked.

In the end their winning margin was 9 hours 4 minutes, so the two hour penalty made little difference, in fact Fa’avae said, “We were making silly mistakes, like forgetting our tracker, and that may have been a blessing in disguise as we sharpened up after that.”

Behind them the sleep deprived Swedish and Estonian teams struggled to complete the final trek as the night navigation in the rocky Tobati hills was particularly difficult. SAFAT took second place and after the Estonian team spent over 5 hours looking for one checkpoint, they were passed by Team Brazil Multisport, who took third.

That is the joint highest place in the Adventure Racing World Championship for a team from South America, and caps a year then the Brazilian team won both the ARWS South American Championship and the new ARWS Qualifier race in Panama.

Teams continued to finish throughout the next 3 days and the lucky ones saw the waterfalls, cavern and rock arch checkpoints on the spectacular last trek in daylight. In one of the most international World Championships ever, there were 13 different nations and 5 continents represented among the top 14 finishers, and 25 teams completed the full World Championship course. These included two teams from Paraguay, Ulala and DQ team. There were 4 finishers from Brazil and 3 from Sweden.

Both of the Regional series winners who started took a top 10 place with Brazil Multisport 3rd and Team Merrell Songlines (the ARWS Africa Champions) in 8th. The Merrell Songlines team has dominated the 120km races in the Africa Series, but were much less experienced at expedition racing than all the other teams around them, so it was an impressive result in their first World Championship.

They are already looking forward to racing the World Championship on home soil next year, when all of the ARWS regional series winners will take part. (In October the ARWS Europe and Oceania Championship races will take place, followed by the Africa series final in early November.)

The South African team voiced the feelings of so many of the teams about their experience in Paraguay on the finish line. “I was just blown away by Paraguay in a way I didn’t expect” Said Lance Kime. “Every single trek was in a completely new and different area, with such beautiful mountains and rivers. It’s an incredible place with incredible people who live a simple life in a rural part of South America and it was a privilege to have spent a week of my life in such an amazing place.”

His team mate John Collins said, “I wish the family could have a holiday in Paraguay and see how the people here live,” and Tracey Campbell added, “I loved the race. Every day we were in different scenery, it was so clean and beautiful, and they are such welcoming people.”

All of the international teams shared similar views of Race Director Urtiz Iglesias’ course and of Paraguay, and they will go home to share their experiences and tell everyone about the country, as Borgognon hoped they would.

ARWS CEO Heidi Muller said after the race. “We want to thank Gustavo and Urtzi and their team, and the country of Paraguay, for making us so welcome and staging such as successful Adventure Racing World Championship. All of the racers will carry the memory of Paraguay in their hearts and will share their love for this wonderful country.

“It was a joy to have so many international teams and to hear how much they have enjoyed exploring Paraguay. The global participation at the World Championship reflects the growth of the Adventure Racing World Series, which now includes over 50 races, with new additions every month.

“We are looking forward now to our three Regional Series finals in the next 6 weeks, to new Expedition races early next year in Australia, Brazil and America, and at the end of next year to the World Championship, hosted by Expedition Africa in the Eastern Cape of South Africa.”

You can find out more about Expedición Guarani at – https://www.expedicionguarani.com/

For information on the Adventure Racing World Series visit – www.arworldseries.com

The next Adventure Racing World Championship will be held in the Kouga region of South Africa from October 18-30th 2023, and staged by Expedition Africa. Entries open on https://expafrica.net/ on November 1st. 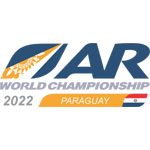