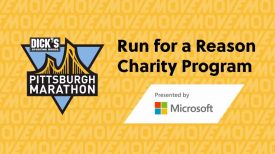 More than 2,500 charity runners are expected to raise more than $1 million for local and national charities this year

PITTSBURGH, PA (February 24, 2022)/ENDURANCE SPORTSWIRE/ – P3R announced today that Microsoft will be the title partner of the Run for a Reason Charity Program at the 2022 DICK’S Sporting Goods Pittsburgh Marathon Weekend of Events. More than 2,500 charity runners are expected to raise more than $1 million for the program this year.

“Giving back to the community and changing lives is important to P3R, and we are proud that the Run for a Reason Charity Program has become one of the most successful marathon charity programs in the country,” said Troy Schooley, P3R CEO. “Each year this program inspires runners to dedicate their miles to something greater while also making a big impact in our community. With the support of Microsoft this year, those efforts will only be amplified.”

Since P3R launched the Run for a Reason Charity Program in 2009, participants in the DICK’S Sporting Goods Pittsburgh Marathon Weekend of Events have raised more than $14 million for local, national and global causes. This year individuals who participate in the program can choose from more than 30 official Run for Reason charity partners and participate in any of the seven events during race weekend.

“We’re inspired by what the Run for a Reason Charity Program has accomplished over the past 13 years, and we are thrilled to be this year’s title sponsor and Charity Mile presenting partner,” said Ron Bianchini, Site Lead for Microsoft Pittsburgh. “People come to work at Microsoft in Pittsburgh to change the world with technology, and that same drive fuels our employees’ passion to make a difference in their communities through programs like this. We applaud all the charity runners and look forward to cheering them on.”

Microsoft also will be the presenting partner of the Charity Mile located on mile 3 of the Pittsburgh Marathon course. This mile will celebrate and cheer on charity runners who run for causes close to their heart.

“The Parkinson Foundation Western Pennsylvania is a charity I now hold near and dear to my heart,” said charity runner Cassandra Donaldson. “My younger brother was diagnosed with young onset Parkinson’s Disease at age 33 and as a previous runner himself, I felt this was a great way to help give back.”

This year P3R is unveiling a second half marathon course exclusively for those who fundraise $1,500 or more for an official charity of their choice. Only 500 runners will have the opportunity to experience the new course with the start line in Shadyside. To commemorate their charitable efforts, runners can also enjoy a full red carpet experience, unique medal and special race day bib.

For more information or to register for the 2022 DICK’S Sporting Goods Pittsburgh Marathon Weekend of Events, visit www.thePittsburghMarathon.com.