Over 11,000 Runners to Participate in Saturday’s Baltimore Running Festival 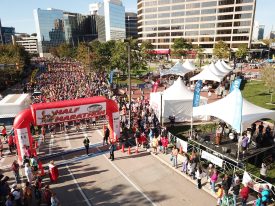 Baltimore, MD (October 11, 2022) /ENDURANCE SPORTSWIRE/ – Corrigan Sports Enterprises (CSE) announced today a projected 11,000 runners will converge on Baltimore on Saturday, October 15th for the 21st annual Baltimore Running Festival. The festival has attracted runners from all 50 states and 15 foreign countries to compete in one of its four races: marathon, CareFirst BlueCross BlueShield half marathon, Pandora 10K, and Curio Wellness 5K.

The day kicks off with the 7:30AM start of the Curio Wellness 5K near the intersection of Light and Pratt Streets at the Inner Harbor. The marathon and 10K get 30 minutes later at Gate A of Camden Yards. Runners will run through the stadium on Eutaw Street before taking on the Streets of Baltimore. The CareFirst BlueCross BlueShield Half Marathon and its field will get underway at 9:45AM in the Inner Harbor.

All races will share the same finish line located on Pratt Street at the Inner Harbor where families, friends and fans can wait for their favorite runner to finish and enjoy free music and games in Celebration Village.

The Baltimore Convention Center will host the Health & Fitness Expo, where runners come to pick-up their bibs and Under Armour race shirt. Expo hours are Friday from 11am-8pm.

According to the Regional Economic Studies Institute at Towson University, the Baltimore Running Festival generates an estimated annual economic impact of $40 million dollars. The event raises more than $1 million annually for local charities, and $14 million since its inception in 2001.

View all Releases by Corrigan Sports