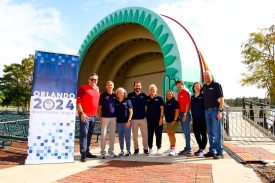 Orlando, FL /ENDURANCE SPORTSWIRE/ – Together with the Greater Orlando Sports Commission, the City of Orlando, and Orange County, Track Shack is thrilled to announce that Orlando will be the host city for the 2024 U.S. Olympic Team Trials – Marathon.

The Trials will be Saturday, February 3, 2024, in downtown Orlando. America’s best runners will compete here for coveted spots on the U.S. Olympic team. The top three men and top three women finishers who meet qualifying performance standards will represent Team USA at the Paris Olympic Games.

“We look forward to a fantastic marathon on the streets of Orlando in selecting USATF’s first six 2024 Olympians,” said USATF CEO Max Siegel. “The competition is the culmination of months of preparation on their Journeys to Gold and we’re excited to see great competition and fast times.”

“On behalf of the U.S. Olympic & Paralympic Committee, I offer congratulations to the city of Orlando for being selected to host the 2024 U.S. Olympic Trials – Marathon and look forward to celebrating this great event on the road to Paris 2024 with the athletes, fans, and our partners at USATF,” said USOPC CEO, Sarah Hirshland. “As the pathway for making Team USA, the U.S. Olympic Team Trials stand out as remarkable sporting events, and we have no doubt Orlando will welcome our elite runners and put on a world-class event.”

“On behalf of City of Orlando Mayor Buddy Dyer, Orange County Mayor Jerry Demings, Jon and Betsy Hughes and the incredible team at Track Shack, and our Chairman of the Board at the Greater Orlando Sports Commission, Sharon Line Clary, we are thrilled to be awarded the 2024 Marathon Trials which will send three men and three women to the 2024 Summer Olympics in Paris, France. Thank you to USATF and the USOPC for selecting Orlando”, said Jason Siegel, President and CEO, Greater Orlando Sports Commission. “As happy as we are for our regional community, we take even more pleasure in the fact that Betsy and Jon will have an opportunity to produce this event celebrating downtown Orlando on an international stage. For 45 years they have been the gold standard producing and operating running events across the United States and abroad. We are beyond confident that our leadership team, local organizing committee, and community, in partnership with USATF and the USOPC, will deliver a world-class event and world-class experience for the athletes, partners and running enthusiasts visiting the City Beautiful from around the globe.”

Together with these three amazing athletes and our supportive running community we will create an epic Olympic Trials experience for all!”

About the Track Shack Family of Companies

Track Shack of Orlando opened for business in 1977 as a small retail operation that focused primarily on selling running shoes and apparel. After 37 years in business, Jon and Betsy were awarded Florida’s Retailer of the Year 2015 by the Florida Retail Federation. Track Shack Events (TSE), a sister company, is a sports marketing company that specializes in marketing, management, and production of active participation events. The mission of Track Shack is that each event produced will benefit the entire community – runners, sponsors, and charities. The award-winning professional staff has earned (TSE) a reputation as one of America’s top sports marketing companies. Jon and Betsy Hughes, co-owners of Track Shack and TSE, ensure that both businesses support charitable causes, in particular charities that benefit youth and youth athletics. These traditions lead to the creation of the Track Shack Foundation in 1994. The Foundation was established as a 501 c (3) organization to promote health and fitness with an emphasis on youth programs.

The Track Shack Youth Foundation has touched the lives of thousands of people and contributed over $2.5 million to this community.

View all Releases by Natalie Casey