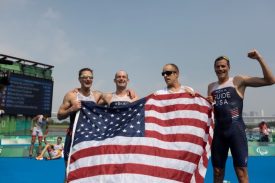 Olympian and Paralympian Team Up to Compete at Philadelphia Distance Run as Part of U.S. Association of Blind Athletes’ Team Tethered Together Program

Philadelphia, Pa. (Sept. 8, 2022)/ENDURANCE SPORTSWIRE/ – Elite-level talent will combine forces on the streets of Philadelphia for the Philadelphia Distance Run (PDR) on Sept. 18. 2016 Olympian and 2020 Paralympic gold medalist Greg Billington (Spokane, Wash.) will serve as a guide runner for 2020 Paralympian Kyle Coon (Carbondale, Colo.) during the half marathon event. Coon is one of 26 visually impaired runners taking part in the annual race in conjunction with the U.S. Association of Blind Athletes (USABA).

Coon, a triathlete, finished fifth in the PTVI division of the Tokyo 2020 Paralympic Games last summer. His time of 1 hour, 3 minutes, was just 40 seconds away from winning the bronze medal. In the same race, Billington guided Brad Snyder to the gold medal in a time of 1:01:16. Five years earlier, Billington competed at the Rio 2016 Olympic Games as a member of the U.S. Olympic Triathlon Team.

“Participating in a USABA event is always incredible,” said Coon, who lost his sight at the age of six after a battle with retinoblastoma – cancer of the eye. “I’ve participated in a handful of USABA endurance events, and they just continue to get bigger and better. I’m especially looking forward to being part of USABA’s first participation in PDR. I have a special place in my heart for Philly seeing as I did much of my treatment at Wills Eye Hospital and lived at the Ronald McDonald House whenever I was in town for treatment. It will certainly be an emotional race for me to run through the streets of Philadelphia where my family and I once thought I might not live, but where we found a community that showed us how to not give up and to fight to find vision.”

USABA hosts its annual Marathon National Championships in December in conjunction with the California International Marathon but has expanded its endurance event offerings this year with the addition of the PDR to its schedule. The response from the blind and visually impaired community has been extremely positive for this East Coast event.

Twenty-eight guides and 26 runners representing 12 states will team up to take on the PDR courses, including all six USABA Endurance Sport Ambassadors. Most runners will wear a bib or vest with the words “Blind Runner” displayed to alert other runners on the course. Their guide will wear a similar bib or vest which displays the word “Guide.” Most duos will hold a tether (a cord or string) to connect them. The guide’s role is to communicate upcoming obstacles and course directions while navigating the safest path possible through the course.

“We are thrilled with the participation interest in this event from runners and guides alike,” said USABA CEO Molly Quinn. “When we looked to expand our endurance sport offerings, particularly on the East Coast, the Philadelphia Distance Run rose to the top in terms of legacy and accessibility. The PDR team has been a pleasure to work with and has created a wonderful experience for our members come September 18th.”

To bring awareness to the tight bond that exists between runners and their guides, and to help create more opportunities for Americans with vision impairment to experience the life-changing benefits of sports, participants in the Sept. 18 PDR are taking part in the Team Tethered Together fundraising campaign, with the goal of raising $26,200 to coincide with the 26.2-mile distance of the marathon.

“In 2022 we’ll be welcoming Team Tethered Together athletes to the city of Philadelphia with open arms and loud cheering sections along our fast and flat course,” said PDR Race Director Barb McKeever. “I want to thank USABA for their commitment and thoughtful partnership in sharing the PDR vision in closing the divide on inclusion. We are all super excited and honored to host USABA and their athletes on September 18 at the Philadelphia Distance Run where we are committed to providing ‘Racing for All’.”

About U.S. Association of Blind Athletes

The mission of USABA is to empower Americans who are blind or visually impaired to experience life-changing opportunities in sports, recreation, and physical activities, thereby educating and inspiring the nation. A member organization of both the United States Olympic &amp; Paralympic Committee (USOPC) and US Soccer, USABA is certified by the USOPC as the national governing body for the Paralympic team sports of goalball and blind soccer. Since its founding in 1976, USABA has reached more than 100,000 individuals through its multi-sport programming. The organization has emerged as more than just a world-class trainer of blind athletes, it has become a champion of the abilities of Americans who are legally blind. In 2022, USABA expanded its offerings of endurance sports events with the launch of its Team Tethered Together program for visually impaired runners and their guides. Learn more at www.usaba.org.