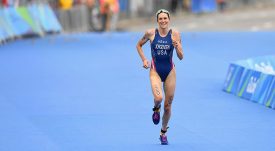 The 2016 gold medalist plans to return to the sport of triathlon with the goal of competing as a member of the U.S. Mixed Relay team at the Paris 2024 Olympic Games.

Together with her husband and chef (and former pro cyclist) Patrick Lemieux by her side, the family works seamlessly as a team. A relatable and accessible working mom, Jorgensen continues to inspire throughout her athletic journey, with her family’s support every step of the way.

“I am thrilled to announce my return to the blue carpet. I’m collaborating with my team to return to form and look forward to the work ahead as I invest in myself and USA Triathlon. I am inspired by the U.S. Mixed Relay team’s silver medal in Tokyo and aspire to contribute to that team in 2024. I believe Team USA can be one step higher in Paris!” Jorgensen said. “But this return is about more than just me. As a mom of two and long-time supporter of USA Triathlon, I strive to set an example that motivates and inspires my family and Team USA.”

“Gwen’s Olympic gold medal and incredible sustained success at the highest level of the sport lifted triathlon’s profile to unprecedented heights throughout her remarkable career,” said Victoria Brumfield, USA Triathlon CEO. “We, along with many multisport fans, can’t wait to follow her journey back to the sport.”

“Our Elite Women’s Triathlon National Team has proven itself year-after-year to be among the strongest and deepest in the world,” said Scott Schnitzspahn, USA Triathlon High Performance General Manager. “As our team builds toward Paris 2024, we are excited to welcome Gwen back to the sport.”

An All-American track and cross-country runner for the University of Wisconsin and a member of the Badgers’ swim team, Jorgensen was recruited into the sport of triathlon in 2010 by USA Triathlon through its newly developed Collegiate Recruitment Program (CRP). That year, she balanced work as a Certified Public Accountant at EY (formerly Ernst & Young) with training and learning the basics of the sport, eventually earning her elite license in her first competitive triathlon.

Jorgensen went on to collect three podiums in her debut professional season — earning the title of 2010 USA Triathlon Rookie of the Year — and in 2011 won three ITU (now named World Triathlon) World Cup podiums. She qualified for her first U.S. Olympic Team in 2012 and was one of the United States’ top medal contenders in London, but suffered a flat tire on the bike and finished 38th overall.

Jorgensen went on to post a record-breaking 2014 season in which she became the first woman in ITU World Triathlon Series history to win eight career WTS events and five in one season. She claimed victory at the 2014 ITU World Triathlon Grand Final and earned the overall world championship title, becoming the first U.S. triathlete — male or female — to win a world title since 2004.

In 2015, Jorgensen went undefeated in seven WTS starts and extended her win streak to 12. She became the first U.S. athlete to win back-to-back ITU World Championships, and punched her ticket to the 2016 Olympic Games with a victory at the Rio de Janeiro ITU Qualification Event.

As the heavy favorite in Rio, Jorgensen used her trademark strong run to claim the gold medal, becoming the United States’ first-ever Olympic champion in triathlon.

Since she won gold, Jorgensen has captivated fans of running — in part because during that golden performance, she pulled away on the run segment of the event and had the fastest split of the day for the 10k. Running fans have since followed Jorgensen’s journey since 2017, when she announced she was giving up the “comfort” of triathlon dominance to pursue a new goal of winning Olympic gold in the marathon. Her announcement came just months after giving birth to her son Stanley.

For four years, Jorgensen trained with the Bowerman Track Club, leaving the club in 2021 to move to Boulder, Colorado, and be coached by Bobby McGee, who she had worked with before.

For Jorgensen’s personal announcement on her social media, click here. For her complete career results and bio, visit usatriathlon.org. For business or PR inquiries, please reach out to media@gwenjorgensen.com.