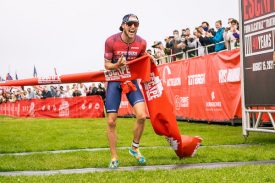 “Winning my fourth straight win was special and now having the opportunity to go for a fifth seems unreal,” said Kanute. “I cherish every Escape win and never take them for granted as this can be an unforgiving course. Escape is one of my favorite races and it is even more special this year since my dad, brother and coach are all racing!”

The pros will join 2,000 amateur triathletes for this annual event. The full list of professional triathletes set to compete in the 2022 Escape from Alcatraz Triathlon and stake their claim in the $50,000 prize purse includes:

Triathletes will hit the water at 7:15 a.m. to embark on a challenging 1.5-mile swim from Alcatraz Island to the shoreline of Marina Green, an 18-mile twisting bike ride through the Presidio, and an 8-mile trail run out to Baker Beach and up the infamous 200-plus step Sand Ladder. To finish the race, triathletes will follow a path back under the Golden Gate Bridge, pass Crissy Field and finish on the grass at Marina Green. Fans can experience the excitement at Marina Green, where the swim exit, athlete transition area and finish line are easily visible. This year’s event will also feature the 2022 Escape Aquathlon on Saturday, June 4. For additional information, visit www.EscapeAlcatrazTri.com or follow @EscapeAlcatrazTri on Instagram and Twitter and www.facebook.com/EscapeAlcatrazTri on Facebook.

IMG is a global leader in sports, fashion, events and media. The company manages some of the world’s greatest athletes and fashion icons; owns and operates hundreds of live events annually; and is a leading independent producer and distributor of sports and entertainment media. IMG also specializes in licensing, sports training and league development. IMG is a subsidiary of Endeavor, a global sports and entertainment company.