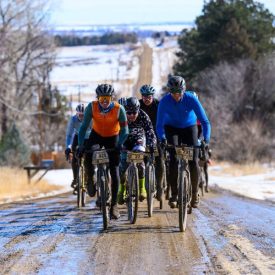 Over 1200 runners and cyclists braved snow, slush and chilly temps for the 8th annual event in Lyons, CO.

BOULDER, CO /ENDURANCE SPORTSWIRE/ – Blue skies, chilly temps, slushy roads and hiking through calf-deep snow on Rowena Pass brought the tagline “epic winter adventure” back to life for this year’s Old Man Winter Rally, held on February 6th in Lyons, Colorado. Between last week’s heavy snowstorm and temperatures that hovered in the low forties in the days following, 1200+ runners and cyclists were in for a fun, wintery, fitness treat last Sunday.

“Conditions this year were perfect,” explains Josh Kravetz, President of Adventure Fit Events and the event director for the Old Man Winter Rally. “We had a mix of dry pavement and trails in and around town, then dirt roads, mixed with snow, mud, ice and slush. Yet, the Colorado sunshine kept everybody warm on a blue-bird day. On the run course, we saw plenty of bare arms and legs but shoes with heavier traction and microspikes. Our cyclists were traveling at faster speeds (until Rowena) so they were bundled up a bit more with jackets, heavier gloves, hats, and full leg coverings. We also saw a lot of cyclists wearing boots. The winner of the men’s 100K bike course, Alex Howes, actually credits his choice of footwear for his win as the conditions on the Rowena required a 2 mile hike through soft snow,” finished Kravetz.

Amidst the slippery, snowy, chilly conditions, the atmosphere was just what the Old Man Winter Rally promises: festival-like. From costumes, live music, good food and fire pits, there was nothing but smiles at the afterparty; smiles and plenty of s’mores (courtesy of a Colorado-based company, Chocolove). While chatting around the fire pits, many athletes mentioned they were drawn to this year’s event because of its efforts to support the Boulder County Wildfire Fund for victims of the Marshall Fire. The event raised $5000 for non-profits through a portion of the registration proceeds plus $20 for every volunteer hour logged at the event. Kravetz and his team also coordinated a public Facebook community group dedicated in collecting and donating cycling and running related products for athletes affected by the fires. This has resulted in donations from over 400 people to date.

The feel-good front range event boasted an impressive start list of professional athletes, but the majority of the participants were biking and running enthusiasts or novices to racing. “The pros in Boulder take this event VERY seriously, putting a ton of strategy into their gear and preparation,” laughed Kravetz. “On the other hand, we had 271 athletes who had never done a race or an event like ours in their lives. We really aim to make the event fun and accessible to everybody so people are inspired to dive deeper into the cycling and running lifestyle. Showing up at a startline with 1200+ other athletes, on a winter day, is very thrilling and surely made memories for all levels of participants.” finished Kravetz.

Some very fast athletes went home with more than a smile on their faces. A $3000 prize purse was split among the winners of the 100K bike race / five deep. For all other categories, the top 3 finishers received over $1000 in product / gift-card prizes. Beyond that, Old Man Winter 2022 offered their traditional Snow Flakes Scavenger Hunt; hiding 100 foam “Snowflakes” throughout the courses for participants to find and exchange for a guaranteed prize from sponsors at the after-party.

After a little bit of a sleep-in and a lot of coffee, Kravetz said on Monday morning, “We genuinely want to thank our sponsors, volunteers and all the athletes who came out this year. It’s been a few years since the Old Man Winter Rally has seen a day like Sunday. We are so grateful for the opportunity to come together on a perfect winter day with our community. We can’t wait to see you all next year!”

Click here for complete results – including the 50K bike, and the Run/Bike Combo.

Visit Adventure Fit Events for a complete listing of their events for 2022.

View all Releases by Thorpe Marketing