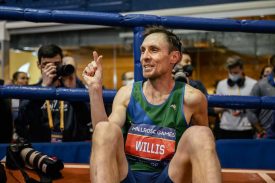 January 29, 2022 – New York, NY/ENDURANCE SPORTSWIRE/ – Tracksmith employee Nick Willis ran 3:59.71 in the Wanamaker Mile at the Millrose Games. The result marked the 5-time Olympian’s 20th consecutive year running at least one mile under the legendary four-minute barrier. The streak began when Willis first ran a sub-four mile at age 19 in 2003. Every year since he has run sub-four minutes, extending the record he previously shared with fellow New Zealand athlete John Walker for an eighteen-year streak.

The race marked his second attempt at breaking four in 2022. He came .23 seconds shy of the record at midnight on New Year’s Day, when he ran 4:00.22. Watch the short film from the race, here.

“This record has had a special allure to me,” said Willis, who works full-time for Tracksmith as its Athlete Experience Manager, is a member of the Ann Arbor-based Very Nice Track Club and also a father of two. “The thought of it has gotten me out the door more days than I can count. It’s helped me push through exhausting workouts and terrible winter weather. I’m proud to have gotten under the barrier today and excited for what’s next.”

Prior to the race, track fan and former T-Mobile CEO John Legere put up a stake of $25,000 for Willis to run sub-four. As a result, Legere’s wager will go to the Tracksmith Foundation, a non-profit dedicated to creating opportunities for youth in track and field.

“Legere’s generous support is huge and will go a long way to helping us build out the Tracksmith Foundation,” said Russell Dinkins, executive director of the foundation. “The support will enable us to build out key programs and resources that we are really excited about, programs and resources that will enhance track and field’s role as an equitable opportunity provider along lines of race, class and gender.”

Tracksmith is a brand for committed runners. We honor the Amateur Spirit upon which the sport was founded and champion the Running Class — those non-professional yet competitive runners who dedicate themselves to the pursuit of personal excellence. We offer considered and original products for training, racing and rest days, and we create experiences that make running more rewarding, more connected, and more meaningful. Run with us at the Trackhouse: 285 Newbury Street, Boston, MA 02130.

About the Tracksmith Foundation

The goal of the Tracksmith Foundation is simple yet ambitious: to give more people the opportunity to participate in Track & Field. We believe the lessons learned from being part of a Track & Field team are the lessons that help create a more inclusive society. Learn more at tracksmithfoundation.org.

View all Releases by Tracksmith