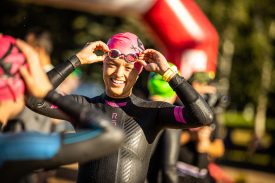 The XTERRA Americas, EMEA, and Asia-Pacific Tours are being re-energized in 2023 with a new format that leverages XTERRA’s World Performance Index (WPI) tool to recognize the fastest age group off-road triathlete in every division across the globe.

/ENDURANCE SPORTSWIRE/ – The XTERRA Americas, EMEA, and Asia-Pacific Tours are being re-energized in 2023 with a new format that leverages XTERRA’s World Performance Index (WPI) tool to recognize the fastest age group off-road triathlete in every division across the globe.

Now in its fourth year, the WPI – a proprietary, formula-driven points scoring system developed by XTERRA Europe technical director Nico Lebrun and IT master Greg Catus – has proven its ability to accurately rank athlete performances and is ready for launch.

“We’re excited to put the WPI to the test in a meaningful way in 2023,” said Lebrun, the 2005 XTERRA World Champion who has dedicated his life to endurance sports racing, coaching, and administration.

“We’ve been fine tuning the WPI formula since 2017 and are confident, through rigorous testing and reality checks, that it produces the most accurate representation of an athlete’s strength at XTERRA racing.”

The WPI delivers a score for every finisher based on a number of factors including; the strength and depth of field as reflected by the top ranked XTERRA athletes competing in the event, the number of participants, and the difficulty of the course that takes elevation, water & air temperature, rainfall, and trail conditions into consideration. Additional factors include the level of event (Silver, Gold, Championship) and the athletes’ finishing time compared to the gender winner.

The results are presented in a clean, user-friendly interface that can be sorted by rank, age group, and country (have a look: XTERRA | Results & Standings).

To determine XTERRA Americas, EMEA, and Asia-Pacific Tour Champions in each age group, the rules are pretty simple. First, to be eligible, athletes in the Americas and EMEA regions need to race three qualifying events during the 2023 calendar year (it’s two in two different countries for the APAC region). Next, every race an athlete finishes will earn a WPI score and the highest score in each age group, by gender and region, at the end of the year is the Tour Champion.

Detailed rules, a complete set of FAQ’s, and a schedule of events for each region can be found at the individual XTERRA EMEA, XTERRA Americas, and XTERRA APAC Tour pages.

“Our three regions cover massive amounts of territory, from Canada to Chile in the Americas and from Switzerland to South Africa in the EMEA region, so it’s difficult to have all the best racers go head-to-head during the regular season,” explained Doug Hall, XTERRA EMEA General Manager. “The WPI system is designed to identify the best racer in each country and each region during the regular season. But to truly settle the score, we hope the regional champs from every age group in every tour come to the XTERRA World Championship and go head-to-head there!”

X marks the unknown. TERRA is earth. United, we are XTERRA – a brand born to discover unknown territory. Since our inception in 1996, XTERRA has been inspiring off-road adventure by connecting people with nature through events with a fun, family vibe. We offer 13 off-road race options, from triathlon-to-trail running, for participants of all ages and skill levels in 47 countries worldwide. We have a global perspective, we aspire to protect where we play, and live the XTERRA lifestyle everyday, anywhere we are. Join us off-road at xterraplanet.com.