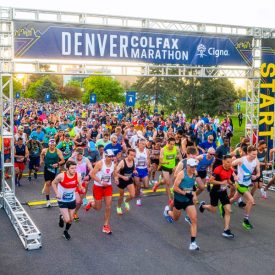 Denver, CO – A new event record was set at the 2022 Denver Colfax Marathon. 35-year-old Tyler McCandless of Fort Collins, CO, ran the high-altitude marathon in 2:21:07, breaking the previous marathon course record by three minutes. McCandless recently came in 4th at the Los Angeles Marathon and has qualified for the 2024 Olympic trials.

This marathon prides itself on having a picturesque race route and unique entertainment for its runners. It’s one of the only races in the country to run through a working fire station and alongside animals at the Denver Zoo.

There are more than 50 entertainment acts throughout the course, and the race has one of the most scenic start and finish lines in the country. Runners start and finish lakeside in Denver’s City Park, which is surrounded by spectacular mountain views.

The Finish Line Festival welcomed 50,000 people to Denver’s City Park, for a post-race beer and bratwurst lunch. Runners were treated to complimentary Colorado beer and locally made brats. The beer was flowing, and the grills were going all afternoon. A live local Colorado band kept the party going in the gorgeous 75-degree weather.

The Denver Colfax Marathon has one of the largest charity partner programs in the country, with over 150 non-profits using the marathon to raise funds and awareness for their charity each year. In addition, the marathon has a $100,000 prize pool for charity that they will be giving out in June at their yearly Marathon Awards Evening. Winning teams that compete in corporate, government and open divisions can win up to $2500 for a qualified charity partner.

The 17th Denver Colfax Marathon will take place May 20-21, 2023. Early registration for those races begins in late summer of 2022.