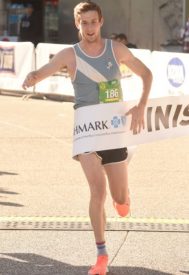 Nick Wolk breaks 5K record and is the first-ever participant in race history to win both the 10K and 5K races. Nina Zarina wins the 10K and Lisa Burnett wins the 5K.

PITTSBURGH (September 26, 2021) – After a virtual-only event in 2020, more than 7,500 runners returned to a live start line for the 44th running of the Richard S. Caliguiri City of Pittsburgh Great Race. This year’s One Great Weekend, which also included the Dollar Bank Junior Great Race, featured participants ages 1 to 92 from 38 states.

“The Great Race has been my favorite race for a long time,” Wolk said. “I was feeling pretty good this morning and was hoping to win both races and set a new 5K record.”

“The weather conditions were perfect today,” Burnett said. “I haven’t raced in awhile, so it’s great to be back. It’s always a great event.”

“Being around other runners at the start line felt so uniting,” said 10K winner, Nina Zarina. “It was difficult to control the pace with all the hills but I loved being able to see some bridges in Pittsburgh and finish on the downhill with no one around.”

In the handcycle division of the 10K, Rory Cooper, Gibsonia, Pa., finished first with a time of 24:48. Lucas Marsak and Jennifer Bigham won the 10K Masters Division, with times of 34:28 and 36:40, respectively.

The race looked a little different this year with new safety precautions, including a rolling start to allow runners to socially distance at the start line. There also were no post-race activities or an award ceremony this year. However, runners were still thrilled to return to one of their favorite fall traditions.

The Dollar Bank Junior Great Race kicked the weekend off on Saturday with three events for younger runners including, the Diaper Dash, the Tot Trot, and the Family Fun Run. The courses were open for three hours, allowing more than 550 participants to run whenever they were ready, and even multiple times for those up to it!

More than 250 runners completed the One Great Challenge and earned an extra shirt and medal by completing both the 5K and 10K. Additionally, all 21 men known as the “Perfect Great Racers” crossed the finish line at today’s 10K, marking the 44th time they have all completed the race.

Each year the Great Race donates $1 from every Great Race and Dollar Bank Junior Great Race registration to the Richard S. Caliguiri Amyloidosis Fund, a fund held by the Pittsburgh Foundation that is dedicated to supporting medical research. Amyloidosis is a rare protein disorder in which one or more organ systems in the body accumulate deposits of abnormal proteins known as amyloid.

For more information on this year’s event, visit www.RunGreatRace.com.

About the Richard S. Caliguiri City of Pittsburgh Great Race

Each year on the last Sunday of September, the starting gun sounds for a world-class road race that has become a true Pittsburgh tradition for the past 40 years. The Great Race – established as a 10K race by the late Mayor Richard S. Caliguiri – has attracted nearly a half million participants since 1977. Over the years, this popular fall fitness classic has grown to include a 5K run/walk, running clinic, two-day expo and children’s race. For more information about the Richard S. Caliguiri City of Pittsburgh Great Race, visit www.RunGreatRace.com