More than 4,100 Participants Celebrated the 10th Anniversary of the EQT Pittsburgh 10 Miler 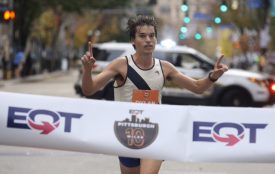 The 40,000th 10-mile finisher since 2013 crossed the finish line at the “most Pittsburgh race ever;” Pittsburgh runner Elaina Tabb repeated as race champion and Dylan Gearinger from Dunmore, Pa. wins men’s race in his Pittsburgh race debut

PITTSBURGH (November 6, 2022) /ENDURANCE SPORTSWIRE/ – EQT Pittsburgh 10 Miler, the ‘most Pittsburgh race ever,’ celebrated its 10th anniversary today with more than 4,100 participants. The 10-mile and brand new 10K course featured local bands and Pittsburgh-themed miles, including the Mister Roger’s Mile, Pittsburgh Foods Mile and City of Champyinz Mile. The 40,000th 10-mile finisher since 2013 crossed the finish line during the event.

“For the past 10 years the EQT Pittsburgh 10 Miler has inspired so many to MOVE and reach new fitness goals,” said Troy Schooley, P3R CEO. “This year we added a 10K option and the Ultimate 10K + 10 Mile Virtual Challenge, so even more people have the opportunity to MOVE and earn their medal.”

Runners from 28 states and six countries participated, including top local running talent who competed for the $11,000 “Best in the ‘Burgh” prize purse. After crossing the finish line today, 73 participants became “Perfect 10s,” having completed every single EQT Pittsburgh 10 Miler since it launched in 2013.

“My husband and I have actually both done this race every year,” said Cara Lincoln, a Perfect 10 runner. “Even if we’re training for other events or coming off of a longer distance race, we never miss the EQT Pittsburgh 10 Miler because it’s truly a highlight of the fall for us. He refers to it not just as Pittsburgh’s favorite fall road race, but America’s favorite fall road race. As long as I’m able to run, I plan to be racing the EQT Pittsburgh 10 Miler!”

Pittsburgher Elaina Tabb repeated as race champion in the women’s division, breaking the tape in 55:49, beating last year’s time by nearly a minute, and winning the top prize of $2,500. Sarah Jackson, from Austin, Texas, finished second in 59:48, and Margo Malone, from Pittsburgh, finished third in 1:00:19.

“The race was so much fun,” Tabb said. “The weather was a lot warmer than last year, and I felt the humidity. I’m a teacher at Oakland Catholic, and I noticed one of my students who was also running right before the race. It was awesome. I love running in Pittsburgh and having the support of my school, as well as the rest of the Pittsburgh community.”

On the men’s side, Dylan Gearinger, from Dunmore, Pa., took an early lead and crossed the finish line in 49:02. Alejandro Ambrosio, from Boulder, Colo., finished second in 50:07, and Pittsburgher Nicholas Wolk finished third in 50:53.

“The course was a lot tougher than I thought it would be,” Gearinger said. “There were more hills than I expected and a lot of bridges, but the city is beautiful. I’ll definitely be back. I’m going to celebrate by getting some pierogies.”

Parents and guardians could also take advantage of Kids of STEEL programming during the race, which allowed adults to run the race while their kids participated in fun activities that included Pittsburgh themes similar to what was on the course.

This year’s participants began their 10-mile journey on West Carson Street near Highmark Stadium and entered the Military and First Responder’s Mile presented by Howmet Aerospace. They continued through Mister Roger’s Mile after crossing the West End Bridge and celebrated 10 years of Daniel Tiger while running past a giant inflatable of the icon himself. Next up was the DICK’S Sporting Goods City of Champyinz Mile, which showcased Acrisure Stadium and PNC Park and featured the Steel Line, Iceburgh, Pirate Parrot and Steely McBeam.

Participants entered the PGH Entertainment Mile at mile six on the 16th Street Bridge and were greeted by Kenny the Kangaroo from Kennywood and Ricky Raccoon and Duke the Dragon from Idlewild. At mile seven, participants had the opportunity to taste pickle shots, pierogies and cookies in the Pittsburgh Food Mile. Local bands Just JJ Acoustic, DJ Juan Diego Inc, Neostem, The Altered Egos, Lead Singer Wanted and Silver Trout Novelty Dot also lined the course to keep participants entertained all the way to the finish line in Downtown Pittsburgh on Liberty Avenue.

Those interested in participating and earning this year’s medal can still register for the Virtual EQT Pittsburgh 10 Miler and Ultimate 10K + 10 Miler Virtual Challenge. For more information and complete results for the 2022 EQT Pittsburgh 10 Miler, visit: www.Pittsburgh10Miler.org. Click here for high resolution images from today’s race.

About the EQT Foundation

The EQT Foundation was established by EQT Corporation, the top natural gas producer in the country, and is committed to the social and economic vitality of our operating regions. The EQT Foundation believes in meaningful engagement with the communities it calls home, and takes great pride in the role as both a responsible and responsive corporate citizen. The EQT Foundation has developed strong partnerships with a variety of nonprofit organizations to enrich the diversity and viability of our communities, sustain the principles of continuous learning, and focus on environmental protection efforts. Read more at: www.eqt.com/our-communities/eqt-foundation