More than 15,000 Participated in “Family Day” at the 2022 DICK’S Sporting Goods Pittsburgh Marathon Weekend of Events 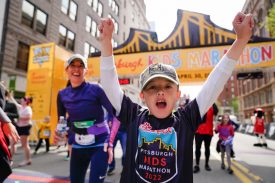 “Today’s events spanned generations, and today’s toddler is tomorrow’s marathoner, just beginning their lifelong love of moving,” said Troy Schooley, P3R CEO. “We couldn’t have asked for a better day to celebrate with all of today’s participants as they crossed the finish line and earned their medal.”

In the women’s 3.1-mile race, Roberta Groner, of Ledgewood, N.J., broke the tape and finished in 17:16. Pittsburgh resident Nicole Feng finished second in 19:07, and South Park, Pa. resident Courtney Sweeny finished third in 20:21. For a complete list of 5K results, go to: www.thepittsburghmarathon.com/pages/results-pittsburgh-marathon.

The one-mile Chick-fil-A Pittsburgh Kids Marathon, which started near PNC Park, drew more than 10,000 kids from 200 local schools and organizations and their parents. Pittsburgh Steelers player Mitch Trubsiky, as well as several mascots such as Pirates Pierogies and Chick-fil-A cows were on hand to motivate the kids at the start line.

Many of the kids celebrated their “last mile” of the Kids of STEEL program. During the program, participants are challenged to move the equivalent of 25.2 miles of physical activity, and then they complete the last mile of their “marathon” with this morning’s event.

The Sheetz Pittsburgh Toddler Trot, which was held at the Finish Line Festival powered by Cleveland Brothers in Point State Park, was also a place of pure joy and laughter as more than 500 toddlers ages 11 months to four-years-old participated in their first race and earned their first medal alongside their parents.

Later at the Festival, the Bruster’s Real Ice Cream Pittsburgh Pet Walk ended the day on a high note as more than 300 humans and their four-legged best friends covered a one-mile course in Point State Park. The walk raised $4,200, benefiting Humane Animal Rescue of Pittsburgh, one of Pennsylvania’s largest non-profit organizations dedicated to the welfare of animals, pet owners and the community.

The Pittsburgh Marathon was held annually from 1985-2003. After a five-year hiatus, the DICK’S Sporting Goods Pittsburgh Marathon was relaunched in 2009 and debuted with a sold-out field of 10,000 participants. It has grown each year since, evolving from a single race day into a weekend of events for the whole family that annually attracts nearly 40,000 runners.Read more at: ThePittsburghMarathon.com