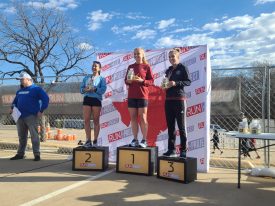 PLANO, Texas /ENDURANCE SPORTSWIRE/ – Run Project marked the start of their 2023 racing season at the Hotcake Hustle 10K, 5K, and Fun Run. More than 1200 participants were treated to hotcakes, coffee, hot chocolate, and ice-cold beer after their dash through the Plano Oak Point Nature Preserve. The run raised funds for the local nonprofit Animal Rescue Crusaders of Texas, along with seven other charity partners.

First in line for pancakes post-race were winners Jacob Kocis, Amy Lyles, Evan Martin and Katelin Gildersleeve. The results were as follows:

Finishers of all distances jammed to music from Run Project’s Resident DJ, DJ Dame, at the after-party. An awards ceremony and a pancake-eating contest also followed the race. Participants received a syrup-bottle-shaped medal and a flapjack-adorned long-sleeve shirt. Event photos are free and shared on Run Project’s Facebook page.

Race beneficiary Animal Rescue Crusaders of Texas is a non-profit, 501(c)(3) all-volunteer animal rescue and adoption organization. Their mission is to rescue and find homes for at-risk cats, providing them with veterinary care, foster homes, and the opportunity to find forever homes through adoption. The group actively promotes animal welfare and the prevention of cruelty to animals. They also educate the public on the importance of spaying and neutering and assist local TNR (trap, neuter, return) projects for feral colonies.

The Hotcake Hustle is one of nine races held by the Run Project across North Texas. The events attract thousands of runners from across the metroplex, the state, and the nation, and raised tens of thousands of dollars for local charities. The next race in the series is the Too Cold To Hold Half Marathon. Registration is open for all distances.

Run Project is Texas’ and the southwest’s premier race series. Run Project represents the top 2% of running events that are locally owned and operated in the Texas area. They are part of the Racing Systems, Inc family of brands. The brand is authentically local and globally minded, creating world-class, locally-owned events that benefit causes in the Dallas-Fort Worth area. For more information about Run Project, visit www.RunProject.org and follow them on Facebook and Instagram.

View all Releases by Megan