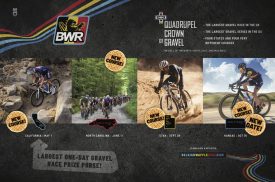 Junior Riders to get Separate Purse

San Diego, CA  – January 6, 2022/ENDURANCE SPORTSWIRE/ – Monuments of Cycling (MoC), a premier cycling events producer best known for its iconic Monument of Gravel, the Belgian Waffle Ride (BWR), announced on Tuesday the prize purse for the BWR CA on April 30, 2022 will be the largest ever for a gravel race with over $50,000 in cash and prizes being distributed between the top five men and women, inclusive of a $5,000 purse and prizes for the top three junior riders, 18 and under, who compete in the Waffle. The BWR CA is the first stop of the 2022 Quadrupel Crown of Gravel Series, which will feature its own soon to be announced prize purse for the top four male and female riders with the lowest cumulative times for the four-race series. The Quad includes the Hell of the North, South, East and (Mid) West.

Created as an extremely challenging race in the spirit of the great European one-day Spring Classics, the BWR is known as the most unique cycling event in the country for its incredibly dynamic multi-surface parcourse replete with dirt, sand, rocks, gravel, water crossings and even some asphalt. There will be three distances on offer in CA, the longer Waffle event on Saturday, April 30, with the half-as-long Wafer and even shorter Wanna rides being held the next day, Sunday, May 1 at North City in San Marcos, CA. Riders can even participate in the ‘Dubbel Header’ by competing in both the Waffle and Wafer events on back to back days.

The BWR CA is the kick-off to the Quadrupel Crown of Gravel Series, which is the largest series of its kind in the world. There will be an overall prize purse for the series, which will be published in February and include a series pay out for the most consistent top four (quad) male and female riders across all the events.

Each venue of the Quadrupel Crown will showcase a new course for riders to test themselves. Most notable are the changes to the BWR CA course, which will include numerous new and technically challenging sectors. All the new routes will have added mileage and, most importantly, technical sectors that require both great bike handling skills as well as bikes and tires that can handle the varied terrain that has become the hallmark of the BWR. Also, each venue will feature a separate prize purse for age categories that have heretofore not been offered…

“Our announcement of the 2022 prize money structure means that our effort to host the very best professional gravel racers in the world to race on the trails and roads of San Diego has commenced,” said Michael Marckx, BWR creator and Race Director. “We are so excited about this year’s guaranteed prize purse, which includes a payout for the top junior riders, because it will allow us to better reward the elites while broadening the pool of recipients and shining a spotlight on the burgeoning talent we have here in the United States. The BWR events’ prize structure is open to all racers, not a hand-picked group of exclusive racers. This is for everybody! These open purses for the Waffle races mean that spectators and participants alike will be able to watch, and perhaps participate side by side with, remarkably talented, world class cyclists.”

The BWR CA Waffle race will pay the top five male and female finishers and the other three events will pay the top three. In addition, at all four venues, there will be time-based competitions for prizes and category winners jerseys in the BWR ‘races within the race’ open to everyone. Each separate competition – Mountains, Dirt and Sprints – will feature three timed segments with the winners coming from the women and men who ride the fastest cumulative times on these designated sectors.

New this year, MoC is investing heavily in rider support for the legion of riders who will comprise the largest gravel race field in the country. This means there will not only be new, safer routes that are perfectly marked, but more Police and Highway Patrol personnel on course, 11 Feed Zones, roving on-course mechanical support for all and hundreds of volunteers on hand to help riders navigate what could be the greatest physical achievement of their lives.

“With other events placing the elite racers as the focus of their efforts, we have made a conscious decision to provide rider safety and support that covers everyone who registers. We want to complement our significant prize purse offering with unparalleled aid for all the riders who approach these events as some of the most important days on their calendar. It’s our mission that the final finishers will receive the same love and support the first finishers get,” added, Marckx.

For 2022, for the entire Quadrupel Crown of Gravel series, MoC has partnered with OpiCure Foundation, which is a 501(c)(3) nonprofit committed to bringing awareness of opioid addiction, redefining best practices for recovery and devoting resources to affect positive change in the Utah community and beyond. Together, MoC and OpiCure want to raise awareness about the opioid crisis by using these large gravel races across the United States to showcase the power of the bicycle. OpiCure Foundation is built around a strong team, including stand-out cyclists and founders, Cullen and Griffin Easter. The medical advisory board includes top addiction doctors and the cycling advisory board includes some of America’s top cycling names, Chris Horner and Howard Grotts. To learn more about OpiCure Foundation visit www.OpiCure.org.

ABOUT MONUMENTS OF CYCLING

Monuments of Cycling is committed to delivering the most unique cycling events in the country, offering experiences for the most elite athletes on the planet as well as those in awe of them, through the creation of world class races that engage riders in myriad and unexpected ways. Our mission is to inspire riders of all stripes to reach, grow and aspire to new levels of fulfillment and joy, finding unusual ways to test their physical and mental fortitude. To learn more, visit www.MonumentsofCycling.com.

View all Releases by Michael Marckx