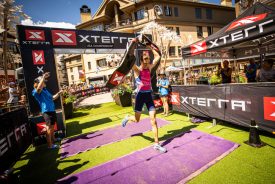 It’s the first elite win for the 18-year-old Middaugh, who was competing in his first elite race against his father, 43-year-old Josiah Middaugh - an XTERRA Hall of Famer and 15-time XTERRA US Champion.

It’s the first elite win for the 18-year-old Middaugh, who was competing in his first elite race against his father, 43-year-old Josiah Middaugh – an XTERRA Hall of Famer and 15-time XTERRA US Champion.

“I feel awesome, everything went perfect for me today, and racing with my Dad in the pro field was amazing,” said Sullivan Middaugh, after winning the XTERRA US Elite Championship crown.

In the men’s elite race, Branden Rakita led the charge early with a 20-minute swim split for the non-wetsuit, 1.5K swim in Nottingham Lake. Timothy Winslow and Kieran McPherson were close behind, Nelson Hegg and Sullivan Middaugh (pictured) were 30-seconds back, and Josiah Middaugh was more than two minutes behind Rakita.

Sullivan got past Winslow, Hegg, and Szuch early on in the bike, charged past Rakita and McPherson to take the lead “two switchbacks up the Ute Trail” about three miles into the course, and then started pulling away.

By mile seven Sullivan was one-minute, 30-seconds ahead of McPherson, followed by Szuch, Rakita, Benny Smith, and his dad was almost three-minutes behind.

“Knew I had a gap but still had to push because my Dad is a super strong rider, and so are the other guys, so I had to push the whole way,” said Sullivan, who was 100% in charge until he got a flat tire.

“I hit the bridge at village-to-village really hard and heard my tire wheezing so I stopped right away and tried to fill it. Plugged one hole but there was another one. Filled it up as much as I could, but it was leaking the whole way so I probably had five PSI going up the last climb and then I just rode the rim the whole way down corkscrew.”

Corkscrew is the super fast, twisting, two-mile long downhill just before the finish.

“I cannot believe how fast Sullivan rode down corkscrew on a flat,” said Josiah Middaugh, who at that point had worked his way into second position about 30-seconds behind his son. “I mean, I put 1:30 on Colin who started the downhill with me, but nothing on Sully.”

Once on the run the younger Middaugh took off and posted the fastest 10K split of the day (39:36) to cross the line in 2:20:28, a little less than two-minutes ahead of his dad (pictured) in second.

“I thought maybe Sullivan would like some company on the run, but apparently not,” laughed Josiah, who posted the fastest bike split of the day (1:16:28) to enter T2 about 30 seconds back. “I’m super proud of him, and happy to have been a part of this. It’s pretty amazing, the kid is next level.”

McPherson ran down Brian Smith and Colin Szuch to finish third, with Szuch in fourth and Smith in fifth.

“Everybody was worried about Josiah today, but it turned out we were worried about the wrong Middaugh,” said McPherson, who made a remarkable comeback after breaking his back in December last year.

“Just an insane day for the young fella, great to see that in the sport,” he added. “And that new course is a great improvement, great change for the better, and finishing in the middle of the village here was really special.”

In the women’s elite race Maeve Kennedy (AUS) was first out of the water in 20:44, followed by Amanda Presgraves five seconds later, then Suzie Snyder another 15-seconds back. Lesley Paterson (GBR) was more than three minutes behind after the swim.

“The swim was horrible,” exclaimed Paterson. “I tripped on the first beach run, the altitude was killing me, and so was my obvious lack of swim training, it was terrible. I was thinking to myself that I’d never do this again.”

Once on the bike, however, things changed. Paterson passed Nicole Valentine and Presgraves early on, cut the deficit to Kennedy and Snyder in half by the seven-mile mark, and got to the front before the midway point on the bike.

“I was in the zone on the bike, and really enjoying it. It was such a beautiful day, a great course, tacky trails, I mean the conditions were absolutely perfect,” she said.

What makes her accomplishment ever the more remarkable is that she is also working more than full-time as a movie producer.

“If I can continue to jump into races, have fun, do well, and then make films at the same time, that’s my dream,” said Paterson, as she looks forward to the defining moment in her movie making career. “Our film All Quiet on the Western Front is going to come out in theaters in mid-October, and then on Netflix at the end of the year, and hopefully we’ll be campaigning for an Oscar.”

Snyder finished strong in second, and as the top American won the XTERRA US Elite crown for the fifth time in her career.

“It’s cool to get that title, I’m really happy considering all the stuff I’ve dealt with this year and the lack of training,” said Snyder.

The surprise of the day in the women’s race came from Amanda Presgraves, who was racing as an elite for the first time and on a rented bike, when she ran down Maeve Kennedy in the last 100-feet to take third place.

“I saw a ponytail, and kicked it into another gear. She was in front of me the whole time. I was pushed to a whole new level today,” said Presgraves (pictured). “I followed Suzie up the switchbacks at the start of the bike and was redlining the whole time, and I kept having this impulse to take my phone out and take pictures everywhere because it was so beautiful. The wildflowers, the views, the mountains, I was high on life riding in all that. So grateful to be here.”