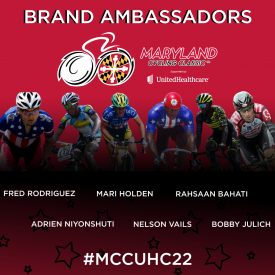 Nelson Vails, an Olympic silver medalist in track cycling; Rahsaan Bahati, a former U.S. National Champion in criterium; Mari Holden, an Olympic silver medalist and former world-champion in time trial; Bobby Julich, a past podium finisher in the Tour de France; Fred Rodriguez, the only four-time U.S. Professional Champion in road racing; and Adrien Niyonshuti, the first black African to race in cycling in the Olympics, were named as brand and community ambassadors.

The diverse group is made up of individuals with incredible stories. Vails, a native of Brooklyn, N.Y., became the first African American to win a cycling medal in the Olympics, and was recently featured in The Cheetah Story, a documentary about his life.

Bahati is a native of Los Angeles and a former national champion who still actively races at an elite level. He is founder of Bahati Racing and Bahati Foundation, mentoring inner-city youth.

Holden is Asian-American and a native of California now living in Colorado Springs, Colo.; she won her medal at the Sydney Olympics and followed up later that year by winning the UCI World Championships in the individual time trial. She now works with the USA Cycling Foundation and helped launch their “Let’s Ride Program”.

“I’m looking forward to the return of international level racing in the U.S. at the Maryland Cycling Classic,” said Holden. “The combination of community engagement and professional racing will inspire everyone. Not only will there be racing, but there will also be fun events teaching bike safety to kids and advocacy. It’s going to be an incredible weekend.”

Julich, a native of Glenwood Springs, Colo. who now lives in Greenville, S.C., began his career with a bang, finishing fifth overall in the 1990 Tour de Trump as an amateur racing for the U.S. National Team. He went on to a storied career culminating with a third-place finish in the 1998 Tour de France. He is currently one-half of the popular “Bobby & Jens” podcast distributed by Outside, Inc.

Rodriquez has been one of the most prominent Latino-American professional cyclists, and one of only a handful of Americans to win a stage of the Giro d’Italia. He is also the only four-time U.S. Professional Champion in road racing, winning his last title in 2013. He is a native of Los Angeles and now lives in the Oakland area.

“As a four-time U.S Pro Road Race Champion, I specialize in one day races, and I jumped at the opportunity to be part of America’s top one-day pro cycling race. I hope to one day see it up there with events like the iconic Milan-San Remo,” said Rodriguez. “I’m looking forward to sharing this experience with the fans and it will be a blast to give them some insights of the ‘ins and outs’ of how a one-day race unfolds.”

Niyonshuti was made famous as the star of the Rising from Ashes documentary. He was a Rwandan who suffered loss of several family members during the country’s civil war. Under the coaching of Jock Boyer, he became the first black African to participate in the Olympics at the 2012 London Games. His rise to an elite level was chronicled to culminate at the Olympics. Niyonshuti currently coaches and provides leadership and mentoring for African cyclists, including those at an Academy in his native Rwanda.

The group of Maryland Cycling Classic ambassadors will be featured in various community functions throughout the weekend of activities, including the community Bike Jam at Patterson Park on Thursday, September 1, from 4:30 pm to 7 pm in Baltimore. Numerous members will also visit local schools that morning to educate children on bike and helmet safety on behalf of the race. Each ambassador will be featured with a hero card within the Youth Activity Booklet which will be handed out at both events.

Ambassadors will also be featured as guests of the Bridges of Hope of Ride on Saturday, September 3, which begins in Sparks, Md. at the Kelly Benefits headquarters and takes riders on parts of the route the pros will race the next day. The event benefits the UnitedHealthcare Children’s Fund. To register, go to marylandcyclingclassic.us.

Ambassadors will share their unique stories and perspectives during “Night with Champions”, a forum event on Saturday night, from 6 – 8 pm, which examines Ethnic Diversity in Cycling. Finally, on race day, the ambassadors can be found in and around the event and will engage with fans during autograph signings at the Expo area adjacent to the finish line.

“We are thrilled to welcome this incredible group of world class athletes to the inaugural Maryland Cycling Classic,” said John Kelly, Maryland Cycling Classic’s Event Chair and President of Kelly Benefits Strategies. “Fans will have the opportunity to meet and interact with our ambassadors throughout the weekend of events as they share their unique perspectives and experiences about the importance of increasing diversity in the sport of cycling.”

Host partners of the Maryland Cycling Classic supported by UnitedHealthcare include the City of Baltimore, Visit Baltimore, Baltimore County, and the State of Maryland. The event is sanctioned by the UCI and USA Cycling and is managed and marketed by Medalist Sports, LLC of Peachtree City, Ga., and KOM Sports Marketing of Colorado Springs, Colo., professional road cycling leaders the past two decades. The event is a production of the Sport & Entertainment Corporation of Maryland, led by President Terry Hasseltine.

The inaugural Maryland Cycling Classic supported by UnitedHealthcare, America’s top one-day international pro cycling race sanctioned by the Union Cycliste Internationale (UCI) and USA Cycling, is taking place September 4, 2022 in Baltimore, Md. The race will feature the world’s best cyclists including Tour de France participants, National Champions, World Champions and Olympians from over 20 countries. The Maryland Cycling Classic supported by UnitedHealthcare is part of a three-day weekend community celebration of health and wellness featuring participatory events, an interactive festival, local foods and drinks, along with other fun family-friendly activities. The race is endorsed by Maryland and Baltimore Civic Leaders, while owned and operated by Sport and Entertainment Corporation of Maryland. The event is managed and marketed by industry leaders Medalist Sports and KOM Sports Marketing. Learn more about the Maryland Cycling Classic supported by UnitedHealthcare at www.marylandcyclingclassic.us.

View all Releases by KOM Sports