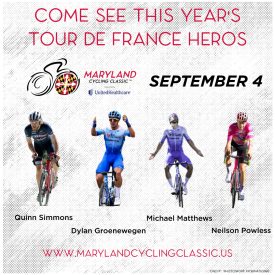 The Maryland Cycling Classic is the top-ranked one-day professional cycling race in America and will feature 16 teams of seven cyclists per team. Each team is registered and licensed under a country name but may have athletes representing various nations. The Maryland Cycling Classic is set to host athletes from over 20 countries, including Tour de France winners, Olympians and current and former National Champions. The composition of teams and riders will include a unique blend of World Tour (top level), Pro Tour and Continental teams from nine countries, highlighted by clubs from four continents (North and South America, Africa, and Europe).

For the past several years, Matthews has been one of the most consistent one-day Classics riders on the world circuit, while Groenewegen has proven to be one of the fastest sprinters.

“I am excited to be racing again in America, it has been a while since I have raced there,” said Matthews, who finished 2nd overall at the 2015 World Championships, which were in Richmond, Va. “My last race in the United States was at the World Championship, and I am looking forward to meeting our American fans again. We have a strong team going there, and looking at the course, it seems to be set up for different type of racing. We’ll have to see how the race will evolve. It’s going to be exciting, and I can’t wait for this race to begin!”

California-native Powless was America’s top overall finisher in this year’s Tour de France, in 13th. He was also America’s top finisher at last year’s World Championships, finishing in 5th. Simmons lit the Tour de France on fire on several stages this year, and, at age 21 proved he’s entering a prime-time position for his American-based team.

“I’ve never been to Baltimore, so it’ll be a new experience for me,” said Powless, the first native American Indian to race in the Tour de France. “I really like the east coast and excited to see what it has to offer. It’s really special that we can race in America this year. I didn’t get to race nationals because of the timing with the Tour de France, so, I’m really excited to race in America for my first time in 2022. I’m happy that it’s in a new place. I’m looking forward to the inaugural edition of the Maryland Cycling Classic and I think we have a really strong team. Hopefully we can put on a good show for the fans in America.”

Several additional American stars will be on display, highlighted by Human Powered Health’s Robin Carpenter, a Philadelphia, Pa.-native who has stage wins at USA Pro Challenge, Tour of Utah, and Tour of Britain and was overall champion in the 2016 Tour of Alberta (Canada) and Colin Joyce of the U.S., who has career stage wins at Tour of Alberta, Tour of Denmark and Tour of Norway; as well as former road national champion-turned-Gravel Racing-star Alex Howes of EF Education-EasyPost. Howes has won stages at the USA Pro Challenge and Tour of Alberta and is an American fan favorite.

Among the international notables: Israel-Premier Tech’s sprinter Giacomo Nizzolo of Italy, a stage winner at last year’s Giro d’Italia and Sep Vanmarcke of Belgium, one of the top one-day Classics riders on the world circuit for the past decade, whose last win in North America was eight years ago at the Tour of Alberta; Trek-Segafredo’s Tony Gallopin of France, who has won stages at both the Tour de France and Tour of Spain, and Latvia’s Toms Skujins, who won three stages of the Tour of California and always races well in America; Human Powered Health’s sprinter Arvid de Kleijn of the Netherlands and current Canadian National Champion Pier-André Côté; 2022 Tour of Colombia champion Fabio Duarte of Colombia and the ageless Oscar Sevilla, 45, of Spain, a top 10 finisher in all three Grand Tours (France, Italy, and Spain); Team BikeExchange-Jayco’s Damien Howson of Australia, a former U23 World Champion in the Time Trial and 4th place finisher in the 2018 Colorado Classic; former Canadian National Champion Matteo Dal-Cin of the Toronto Hustle; and young Dutch sprinter Marijn Van Den Berg of EF Education-EasyPost, a two-time stage winner at France’s Tour de l’Avenir in 2021.

Among the other notable Americans: USA National Team members Scott McGill of Fallston, Maryland, who won two stages recently at the Tour of Portugal and Tyler Stites of Arizona, who was second at the U.S. National Championships and winner of the Redlands Bicycle Classic earlier this spring; Sean Quinn of California and team EF Education-EasyPost; California’s Tyler Williams and Ty Magner of Georgia, a former Tour of Utah stage winner of L39ION of Los Angeles; and ’21 U23 National Champion in the time trial, Michael Garrison, of team Hagens Berman Axeon .

For updated information or to volunteer, please visit www.marylandcyclingclassic.us.

The inaugural Maryland Cycling Classic supported by UnitedHealthcare, America’s top one-day international pro cycling race sanctioned by the Union Cycliste Internationale (UCI) and USA Cycling, is taking place September 4, 2022 in Baltimore, Md. The race will feature the world’s best cyclists including Tour de France participants, National Champions, World Champions and Olympians from over 20 countries. The Maryland Cycling Classic supported by UnitedHealthcare is part of a three-day weekend community celebration of health and wellness featuring participatory events, an interactive festival, local foods and drinks, along with other fun family-friendly activities. The race is endorsed by Maryland and Baltimore Civic Leaders, while owned and operated by Sport and Entertainment Corporation of Maryland. The event is managed and marketed by industry leaders Medalist Sports and KOM Sports Marketing. Learn more about the Maryland Cycling Classic supported by UnitedHealthcare at www.marylandcyclingclassic.us.

View all Releases by KOM Sports