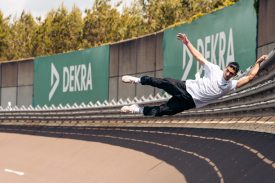 Khedoori has committed himself to a life evangelising parkour and movement. He unites athleticism with artistry through filming his extreme feats and sharing them on social media platforms where he has amassed a faithful and engaged following (2.1 million on Tiktok). He has also appeared on television: on the 2021 Australian game show Ultimate Tag, he and fellow parkour practitioners (called traceurs) played a high-stakes form of tag attempting to catch contestants making their way through various obstacle courses.

The 19-year-old out of Sydney, Australia competes in both nationwide and international competitions as well as teaches all ages at the AAPES (Australian Academy for Parkour and Extreme Self-Defense) gym where he first discovered his love for the sport.

Khedoori is also an ambassador for the Pho3nix Foundation as part of the elite Pho3nix Team, a squad of champions with a shared commitment to reaching the pinnacle of their sporting careers, inspiring the youth and generations after to chase their dreams.

He says, “I signed with MANA because they’re a great fit for me and I appreciate their more hands-on approach to management.”

MANA athlete Henri Schoeman has renewed his contract with multisport technology company Wahoo Fitness, and has also signed with HED Wheels. The Commonwealth Games gold medalist and Olympic bronze medalist has made a full recovery from what seemed like a career-ending ankle fracture, and looks forward to training and racing with his sponsors continuing to back him.

“I’m very happy to partner with HED Wheels and Wahoo as I believe both will give me confidence on the bike and an extra edge as I make my way back to the top. MANA has been an irreplaceable part in this process and keeps believing in me and my future,” Schoeman says.

Magnus Ditlev pulled his weight on Team Europe for the Collins Cup triathlon on August 20 in Bratislava, Slovakia. The Dane won his match against Team USA’s Rudy von Berg and Team International’s Max Neuman with a margin of more than 7 minutes, giving him the maximum six points that helped build Team Europe’s insurmountable points lead to defend their title.

Olympic triathlete Maya Kingma will debut over longer distances at Ironman 70.3 Zell Am See-Kaprun in Austria on August 28, while Joe Skipper is training hard at altitude in Font-Romeu in the Pyrenees preparing for Ironman Wales on September 11 as well as the Ironman World Championship in October. Skipper says, “After Wales I will head to Maui for some heat training to finish my preparation.”

MANA SEG works with the very best in the world of endurance sport. For a detailed discussion about working or partnering with any of our athletes, please contact: tim.ford@manaseg.com.

Mana stands for power and prestige, with an unparalleled network and credentials in the wide world of sports and entertainment. We deliver our projects, programs and services with pride, boldness and authority. Led by two-time Ironman World Champion, Chris McCormack, the Mana team has been responsible for some of the most important innovations in triathlon, including Super League Triathlon, the Bahrain Endurance 13 Team, and now the creation and delivery of Pho3nix Sub7Sub8, powered by Zwift Project. More information is available at www.manaseg.com.