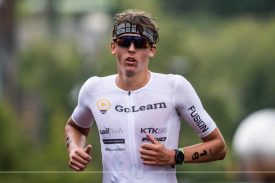 The Danish athlete recently signed a multi-year deal with Scott Bikes and HED Wheels, and the race was the perfect opportunity to test his new race setup. He says, “I feel honoured and privileged to be working with such strong brands, and I’m sure we’ll accomplish big things together. On board my new Scott Plasma bike equipped with HED wheels I powered through the bike course and was leading the race by a big margin until the 175-km mark, where I had a big cut in the side of my tire. Even though I had to wait on the side of the road for nine minutes, I still entered T2 in fourth position and managed to run myself to the front of the race with a 2:40 run split, finishing second after a sprint finish.”

Scott Bikes pioneered the world’s first aerodynamic handlebars used by Greg LeMond in his 1989 Tour de France win. Scott continues to innovate and be at the forefront of cycling technology.

HED have set the industry standards since Steve Hed handcrafted his first aerodynamic composite wheel in 1984. HED wheels have been victorious in every major race in the world over the past three decades, from Tour de France and Giro d’Italia stages and World Championship time trials to Ironman World Championships.

European champion and MANA athlete Kat Matthews has signed on to the Pho3nix Sub8 Project, Powered by Zwift. The third-fastest British female long-distance triathlete, national time trial cycling champion, and current world #6 is the newest contender for the audacious attempt to race the full distance of triathlon in under eight hours. She replaces Ironman 70.3 world champion Lucy Charles-Barclay, who has been ruled out of competition in the next few months due to a hip bone fracture.

Matthews will go up against dual Olympic medallist and European champion Nicola Spirig in a head-to-head battle, taking on the challenge of swimming 3.8 kilometers, cycling 180 kilometers, and running 42 kilometers faster than anyone ever before.

Matthews says: “I’ve been following the event for a while and when the opportunity came, I jumped at it. I’ve been training really well and I’m ready. So Nicola Spirig, watch out. I’m ready for a race. I’m there to Defy the Impossible.”