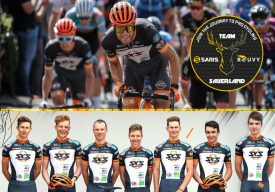 Madison, WI / SARIS and ROUVY are proud to announce a new partnership to become the title sponsors for the UCI Continental racing team, previously known as Team SKS Sauerland NRW. The team will now be called the SARIS ROUVY Sauerland Team. Founded in 2016, the mission of the team is to offer young talented athletes an environment where they can learn and develop skills that will help them reach the pro level. The focus will be on giving riders ages 18-23, who have had little to no access before, a path towards pro cycling. The mission of Saris is to break down barriers to make cycling more inclusive. The SARIS ROUVY Sauerland team will have the opportunity to break down their own barriers as they make their journey towards the pro tour.

December 21, 2021 | Madison, WI /ENDURANCE SPORTSWIRE/ – “The goal for the team is to achieve respectable successes in international races in the coming year, to qualify for the Deutschland Tour again and to defend the title of German Team Time Trial Champion, as well as the Lead in the German National Cycling League,” said Heiko Volkert, Managing Director of the team. “We are also striving to make the leap from the Continental Team category to the Pro Team. For that, we take a different sustainable approach. We have just finished building our new service course as our investment. We also want to achieve sustainable growth with our new and existing sponsors. The quality of our roster improved significantly and will become even more international with our new partners SARIS and ROUVY.”

In late January every season, roster selection will partly take place through online races, giving more riders an opportunity to participate. Qualification will happen through an online 4-part race series on ROUVY, with final selection happening at the in-person team camp in March in Girona (Spain).

“I am happy to open up a new page in ROUVY’s narrative by providing anyone from anywhere in the world the opportunity to compete for a pro contract, and this is very exciting. Additionally, by enabling athletes to ride anywhere from home, we can help find the best talent out there,” adds Petr Samek, CEO of ROUVY.

Currently the SARIS ROUVY Sauerland Team is looking to fill two roster spots. In addition to the expertise of SARIS, ROUVY, and the current Sauerland team management, other jury members will include former pro cyclist and Sport Director of the Deutschland Tour, Fabian Wegmann.

“We love pro cycling, but we want to participate in a way that is aligned with our vision and core values of inclusivity. Through this effort we are doing one small part to make pro cycling accessible to individuals who may never have had the chance to participate in the sport,” Frank Schreiner, Saris Head of Marketing, Europe.

SARIS ROUVY Sauerland is looking for passionate riders who will be a good fit for the already formed team, bringing with them equal parts skill and personality. Riders can visit www.saris.com/sarisrouvysauerland to apply. Riders from across the globe are encouraged to apply.

Saris aims to break down barriers and provide opportunities for all people to fall in love with the bike. An inclusive thought process is behind everything they do. Through their products, their people, their partners, and their advocacy efforts – Saris is dedicated to removing the obstacles that exist between ALL people and their ride. Based in Madison, Wisconsin, Saris proudly dreams, designs, and builds car racks and indoor bike trainers, as well as public bike systems and infrastructures. The Saris Foundation is a nonprofit organization that launched in 2021 to build bike parks for kids. To learn more about their efforts, or to apply for a grant please visit: www.sarisfoundation.org

ROUVY is a digital racing platform for athletes all over the world to compete, ride or run with friends, complete workouts, and much more. ROUVY offers thousands of exciting augmented real roads to join the pro peloton online or compete with friends for fun. Cycling enthusiasts and the most competitive athletes are welcome to cycle the world from home, stay fit, or get ready for the next race! www.rouvy.com