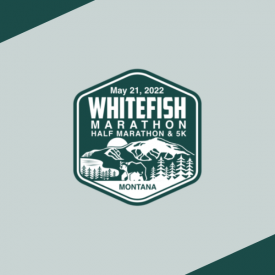 WHITEFISH, Mont. (June 20, 2022) /ENDURANCE SPORTSWIRE/ – Runners and walkers lined up for the 2022 Whitefish Marathon Powered by Hammer in cool temperatures but the competition heated up as participants raced in the shadows of Glacier National Park on Saturday, May 21. While the event attracted participants from more than 40 states and five countries, local runners benefited from training in the hills and valleys of northwest Montana. All events were won by runners living in or near the Whitefish area, and Montanans broke the half marathon course records.

As one of the fastest growing events in Montana, registration numbers doubled in 2021 compared to the previous record. The event continued its strong rise in popularity in 2022 with an increase in full marathon finishers.

“We’re thrilled with yet another year of growth for the Whitefish Marathon,” said Art Krueger, executive director of The Wave. “With Hammer Nutrition’s increased support, we’re really able to bring the event to another level and hope to keep this momentum going for 2023 and beyond.”

The Whitefish Marathon started as a trail marathon in 2008, originally named the Two Bear Marathon. In 2017, the date shifted from September to May, and the course moved to paved streets as a Boston-qualifier event. The Whitefish Marathon is now supported by The Wave Aquatic and Fitness Center, and proceeds from the event benefit The Wave’s scholarship fund.