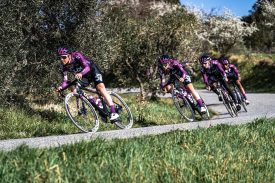 OOSTERHOUT (the Netherlands) – June 26, 2021 – Liv, the company dedicated to getting more women on bikes, demonstrated its commitment to supporting women’s professional road racing at the highest level today by announcing the extension of their title sponsorship of the Liv Racing WorldTeam for at least three more years after the 2021 race season. This news follows recent announcements that Liv will debut as a major partner of the Tour de France Femmes avec Zwift in 2022, supporting the best young rider classification. The team is also featured in “The Run Up,” a behind-the-scenes web series that previews the team’s final preparation for the 2021 La Course by le Tour de France, one of the biggest one-day races on the women’s WorldTour calendar.

“Our title sponsorship of the Liv Racing WorldTeam this year, and the expansion of our partnership going forward represents our commitment to creating more opportunities for women in professional road racing,” said Phoebe Liu, chief branding officer of Giant Group, which includes Liv, Giant, Momentum and CADEX brands. “Liv works with women at every level of cycling, from beginners to the pro peloton. This partnership exemplifies how we work with our pro road team to create the most innovative performance products on the market for women, like our new 2022 Langma Advanced SL Disc. These riders are an essential component to our research, design and development process. We are proud of what we’ve accomplished and excited to continue to evolve our performance road products together.”

“Our team was founded in 2009 and is deeply rooted in women’s cycling. Many of the team’s successes have been achieved together with Liv, and we are excited to begin this next phase together,” said Liv Racing WorldTeam manager Eric van den Boom. “Liv has shown time and again to be very involved in and supportive of women’s cycling — both on a recreational and a professional level. The level of ambition Liv has to advance women’s cycling is very high and matches well with the goals of this team.”

Video for “The Run Up” series is being hosted at www.therunupseries.com.

About The Run Up

In the days leading up to La Course by le Tour de France, the camera crew of “The Run Up” followed the riders of Liv Racing during their preparations. The result can be seen in the second episode of the series. Watch the video online beginning June 25 at www.therunupseries.com.