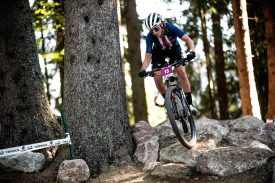 KX3 athletes excelling at NICA and Leadville 100, to World Cup, World Championships, and beyond

KX3 athlete, Haley Batten, brought home bronze in the 2022 XCO Mountain Bike World Championships in Les Gets, France; and another bronze alongside KX3 athlete and Team USA relay teammate, Maddie Munro. For Batten, the World Championships were on the heels of two strong finishes on the elite World Cup circuit—a 3rd place at Mont-Ste-Anne and a 7th place at Snowshoe; while Munro grabbed a pair of U23 World Cup podiums, 2nd at Mont-Ste-Anne and 3rd at Snowshoe.

“I’ve just finished racing the 2022 Mountain Bike World Championships, coming away with a strong ride and lots to take away from the race,” said Maddie Munro, KX3 athlete. “KX3 has pushed and expanded my limits as an athlete in the short amount of time we have been working together and I think it’s fair to say the work is paying off! Not only does Kristin guide me on the bike, but provides encouragement, support, and knowledge in all aspects of racing and being an athlete. A very big thank you to KX3 for the incredible coaching and being a part of my village!”

KX3’s coaching philosophy centers around helping athletes at any level take a holistic approach to their goals, working to help clients eliminate the guesswork of how to get there, providing support and accountability along the way, and then building on clients’ confidence and accomplishments.

“We’re excited to be offering both one-on-one and team coaching to juniors, men, and women looking to up their cycling game,” said Kristin Armstrong, 3x Olympic Gold Medalist and Co-Founder of KX3 Lifestyle + Coaching. “With the results we’ve been seeing through our personalized coaching plans, we wanted to extend our expertise to support team coaches like those across the National Interscholastic Cycling Association (NICA), for example. It’s a rewarding way to come full circle in sport and be able to help others reach their personal gold, whatever that might be, and I’m thrilled to be working with KX3 coaches, Emma White, Kaitie Keough, Haley Batten, and Sarah Barber.”

KX3 offers coaching designed specifically to support junior athletes, including entry level juniors who are looking for basic structure—to the highest level of coaching expertise in creating pathways to high performance for elite juniors. Co-founder Nicola Cranmer, has been on the forefront of junior athlete development in cycling for nearly two decades. Under her leadership and guidance, her team (now Virginia’s Blue Ridge TWENTY24 Pro Cycling) has been awarded the USA Cycling Centers of Excellence Award for 15 consecutive years. This exclusive designation is awarded to select junior and U23 development teams that excel in the development of young cyclists into nationally competitive athletes.

“Through KX3 Lifestyle + Coaching, we bring decades of experience to our youth-specific coaching plans,” said Nicola Cranmer, Co-founder, KX3 Lifestyle + Coaching and Founder, Virginia’s Blue Ridge TWENTY24 Pro Cycling. “The platform is an opportunity to reach more girls and boys with a holistic approach that balances training and education. Teaching our young athletes valuable lessons on and off the bike is critical for maximizing their potential for academics, sports and business, and we are excited to meet junior cyclists where they are and help them excel through purposeful progression that will support them both in sport and in life.”

For juniors who may already have a coach or aren’t looking for a coach, KX3 has introduced HALEY’S HUB, a free membership program that invites junior cyclists to seek excellence with Haley Batten on her journey to the 2024 Olympics in Paris. HALEY’S HUB is built to create a shared learning space for young athletes to help them go beyond the “norm” in racing and life. “I am thrilled to have the opportunity to build this platform alongside KX3 to help develop the future of cycling,” said Batten. “Throughout my journey from a junior racer to an Olympian, I have had many incredible mentors and learning opportunities. I believe that this platform can create community and share insightful experiences and resources to help the next generation prepare for big goals.”

About KX3 Lifestyle + Coaching
KX3 Lifestyle + Coaching (KX3) provides a trusted community and simple-to-follow blueprint for cyclists to gain confidence, strength, and performance on the bike, through indoor/outdoor cycling coaching programs, supportive and educational content, and a place for connection. KX3 was co-founded by mom, wife, entrepreneur, coach, and 3-time Olympic Gold Medalist, Kristin Armstrong, along with partners Nicola Cranmer and Heather Foster. The name KX3 is a tribute to Kristin and her three gold medals won in the women’s individual time trial in the 2008, 2012, and 2016 Olympic Games. Start training with KX3 Lifestyle + Coaching today at KX3LifestyleAndCoaching.com. To learn more, follow us on Instagram @KX3LifestyleAndCoaching or visit KX3LifestyleAndCoaching.com.

View all Releases by Heather Foster

Peloton’s Long-Awaited Rower is Finally Here…Sort Of. Here’s What to Know