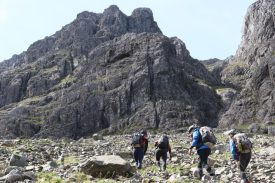 The ITERA 2022 Expedition Adventure Race, the last ARWS Qualifier of 2022, was staged in the majestic wilderness of the Scottish Highlands and Islands

/ENDURANCE SPORTSWIRE/ – The ITERA 2022 Expedition Adventure Race, the last ARWS Qualifier of 2022, was staged in the majestic wilderness of the Scottish Highlands and Islands. Race organisers Open Adventure delivered an ambitious course, through unforgettable scenery, visiting iconic landmarks, and taking teams to remote places, which few people ever get to experience.

Race HQ was in Oban, a busy west coast harbour, known as the ‘Gateway to the Isles, and 32 teams arrived there from all over the UK, Ireland, the USA and Europe. After a day of preparations, course planner Tom Gibbs stood in front of a huge course map and described his 550km route to the excited and nervous teams. It would take them to distant islands, famous places, and to the highest point in the UK by a spectacular route.

The race began with two ferry trips and an island crossing, and that was just to get teams to the start! This was on the small island of Iona, which can only be reached by ferry, after crossing the much bigger Isle of Mull. Iona is known for its ancient abbey and as a remote religious retreat, and for pilgrims it is journey’s end. Not for the ITERA racers! For them it was just the start of their adventure, and after a short run around the island they launched their kayaks from a sandy beach to paddle to the uninhabited island of Staffa in perfect conditions.

After landing below the island’s cliffs, the teams headed for a checkpoint on the small summit, giving them a panoramic view of the surrounding coast and islands, and to a second inside the famous Fingal’s Cave. To get there, they ran across the black basalt columns which form one side of the island and create uneven, natural stepping stones, all perfectly hexagonal and interlinked. The cliffs they ran beneath were formed from the same towering hexagonal columns and so was the interior of the huge sea cave. It was a spectacular first stop for the race and a unique experience for the racers. The cave is known for its acoustics, but most teams were so in awe of their surroundings they were quiet while inside.

There was another island checkpoint to visit before landing on the coast of Mull and teams saw seals, dolphins and whales. Craig Tweedie of UK Adventurers said they’d seen dozens of dolphins, “leaping around, under and over the boat.”  Team Racing Denmark saw a Pilot Whale, and both these teams were among the leaders, tailing SWECO of Sweden, who were the strongest paddlers.

On the opening, night time, mountain trek across Mull the leaders collected all the checkpoints, but many others chose to miss optional checkpoints and put themselves onto a short course early in the race. ITERA courses give teams lots of options, so they can race as much of the course as they can, and this keeps the teams together and gives everyone the best chance to finish.

Cliff White of Team Strong Machine (USA) explained why his team chose to short course early in the race. “We like to think we know our limitations and abilities, so we missed two CP’s on Mull, with only a couple of hours penalty. That took the pressure off and meant we might not be forced into dropping more expensive options later on. We know ITERA and there is nothing given or easy, so you have to respect the course and play to your strengths.”

All of the teams finished at the picture-perfect Duart Castle (a movie set favourite). The course design allowed all of the teams the chance to visit the most iconic locations, and these included a checkpoint at the Glenfinnan Monument and viaduct (famous from the Harry Potter films), riding alongside Neptune’s Staircase on the Caledonian Canal, the ruined Tioram Castle and the 15m wide ‘Bridge over the Atlantic’.

Unfortunately, the leaders didn’t get to see the stunning mountain and ocean panorama from Castle Duart, as they set off on the second sea paddle in dense early morning sea fog to head for the sparsely populated, and little visited, Ardgour peninsula. After a scenic bike ride around the coast and another mountain trek, all of the teams completed the third paddle which took them from loch, to river to ocean.

The 35km route was incredibly varied and beautiful, starting on a damp and misty Loch Shiel, then moving into the crystal clear waters of the Shiel River to pass under two bridges, the second spanning a narrow, fast flowing channel. This lead to a short portage around a rapid, then out into the ocean to reach Tioram Castle, from where the paddle continued into a maze of tidal channels among small islands.

SWECO continued to lead, but it was a close race, and on the following, long, mountain bike stage, they made a decision which cost them their lead. The ride included a long, very tough section of hike-a-bike, which only the remaining full course teams would take on. Ole Hemme Hansen of Racing Denmark described it as; “you carried your bike across one mountain, then across another mountain.”

SWECO and Adventure Trophy (Poland) were ahead and chose a route they found impassable, so they retraced their steps and opted to ride a much longer way around, taking a circuitous 64km route instead of the 16km direct line. The Danish team found a better direct route, and no other full course team followed the long route taken by the Swedish and Polish teams.

Mikael Halberg of Racing Denmark said, “After the hike-a-bike and on a mandatory route into the transition we met the Polish team and SWECO riding towards us! They had tried to go up the gorge we opted out of and turned back to ride a detour of 60 km. Then we knew that their race was lost and they were 5 hours behind us. I stopped because I simply could not understand why we saw them there and I feared we were riding in the wrong direction!”

Now in the lead, the Danish team slept at the next transition, before leaving to climb the Ledge Route up the imposing cliffs of the North Face of Ben Nevis. “It was a fantastic stage,” said Halberg, “We climbed to the highest point in Great Britain, Ben Nevis (1345m) and the sun shone from a cloudless sky. As we got further up, the clouds quickly came in, but it was still beautiful. It was a fun, technical stage, and running over the crests with drops of several hundred meters on each side was a great feeling.”

The stage included the Càrn Mòr Dearg Arête, fording a swift river in Glen Nevis, and a crossing of the Mamore mountains. The Danish team kept their lead on the trek, while behind them the Adventure Trophy team put in a strong performance to get back into contention for the podium places and later teams faced the high peaks in deteriorating weather.

There was more fun to come at Kinlochleven, with a via Ferrata taking teams on ladders, climbs and rope bridges around the canyon of the Grey Mare’s Tail waterfall. It was an exciting excursion before another demanding cross country ride took teams back towards the coast and the finish at Oban. This included a stop for an orienteering course, manned by the local club, and starting and finishing by a cafe at Inverawe, where many teams stopped to eat and rest.

There were no such luxuries for Racing Denmark, who were hanging on to their lead in the final hours of the race, while under pressure from the Endurancelife AR team in second place. (The Danes left the orienteering as the British team arrived.) Halberg said they had a crisis on the ride and stopped to sleep for 10 minutes, then Thea Otte Andersen crashed badly. She was OK, but finished with a bruised face and a black eye.

The cancellation of the final paddle due to bad weather shortened the race at the end, and Racing Denmark held on to ride into the finish on the North Pier at Oban as the 2022 ITERA winners in a time of 96.26.02, finishing 54 minutes ahead of Endurancelife AR, with Adventure Trophy (Poland) finishing third after a strong comeback. For the Polish team it was a case of what might have been.

Halberg said, “We won ITERA Scotland, a dream of mine to win one of the big ARWS races. We beat the teams that were there and fought our way through a fantastic course that was varied and challenging in every way.”

It was also a first ARWS win for his team mate Mikkel Overgaard after many years of racing, and another good result for Thea Otte Andersen after a win in the European Championships and 3rd place at Expedition Africa earlier this year. For Ole Hemme Hansen it was an ARWS win at the first attempt as he had never raced longer than 24 hours before. The team also won a free entry to the new ARWS race, Expedition Ozark, to be held in Arkansas in April next year.

Within the next 24 hours all the remaining teams crossed the finish line, with an incredible 30 of the 32 starters cycling into the finish, all with memories of ITERA 2022 which will last a lifetime.

For James and Lisa Thurlow of Open Adventure the race was a fitting end to 16 years of event organising. Speaking afterwards James said, “It was a simple objective, to put on a world class Expedition Race – a course worthy of the World Champs, and from our conversations with teams after the race I think we got it right.”

ITERA will now be passed on to Durty Events under the management of Paul McGreal, who has worked on the last two ITERA’s as Event Director, with Tom Gibbs continuing as course planner, while James and Lisa Thurlow will now concentrate on developing Open Tracking, which provides live tracking services to many ARWS races around the world.

To review the live tracking and results, and for links to the race reports, photos and videos, see https://live.opentracking.co.uk/itera22/