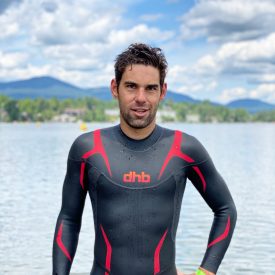 A new world champion, and deals for our athletes announced

Skipper holds the British 12-hour time-trial record, cycling an incredible 325.55 miles. He is currently #7 on the Professional Triathletes Organisation world ranking off the back of his 2021 Ironman wins in Chattanooga and the UK, as well as his Collins Cup performance taking second in his matchup.

He says: “I’m really pleased to be joining MANA. It’s great to be represented by those who really know and are passionate about the triathlon industry. I’m looking forward to competing in two world championships next year and have some big goals for these races. Working with MANA will make it easier to achieve my goals.”

Skipper joins the roster following fellow MANA athlete Lauren Parker’s paratriathlon world title defense earlier this month in Abu Dhabi. The Paralympic silver medalist from Australia claimed her second world title of the year at the World Triathlon Para Championships, following up from the Ironman 70.3 World Championship in September and capping what has been a stellar year.

Parker says, “I have had to overcome some physical and emotional setbacks since the Paralympics in my preparation for these world championships, so it was a really special moment to cross the finish line with this result.”

Tyler Mislawchuk also made his return to racing in Abu Dhabi, finishing sixth at the World Triathlon Championship Series race held that same weekend. After sustaining an Achilles injury going into the Tokyo Olympics in July, the Canadian is finally fit and healthy to compete once more.

“Being back on the start line is everything I wished for and more,” says Mislawchuk. “The entire process of getting yourself ready to race and standing on the start line healthy is something I will not take for granted. Abu Dhabi was a great race considering the injury I was dealing with; it’s something I’m proud of.”

Henri Schoeman has renewed his sponsorship deal with premium bike brand SwiftCarbon. The South African first signed with SwiftCarbon shortly before the Rio Olympics and went on to win Olympic bronze and Commonwealth Games gold. The contract renewal will see Schoeman continue to ride the SwiftCarbon Ultravox to further victories through 2022.

View all Releases by Lisa Pringle