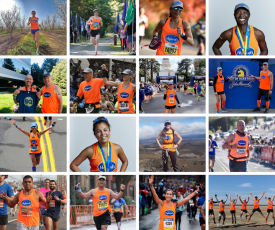 Marathoners, ultrarunners, triathletes, and cyclists to represent the brand at elite U.S. races

LOS ANGELES – July 1, 2020 –Hyland’s, a century-old leader in products to support a healthy, active lifestyle, has announced the 2020-2021 Hyland’s Powered Ambassador Team. A total of 63 diverse athletes from all over the United States have been chosen to represent the Hyland’s Powered brand. While Hyland’s Powered is perhaps best known for their annual Boston Marathon team, this year’s Ambassador team has expanded to include cyclists, triathletes, and ultrarunners.

“Hyland’s is proud to bring a diverse team of outstanding athletes into our ambassador program,” says Hyland’s Powered Brand Director Lisa Shapiro. “This year’s team is bigger than ever. As Hyland’s Powered grows into a lifestyle brand, not only focused on runners, but other endurance athletes as well, we are confident that this ambassador team will make us proud. We are committed to supporting these athletes so that they in turn can continue to help and support others.”

Since 2017, the Hyland’s Powered brand has been recognized as the Official Cramp Relief Sponsor of the Boston Marathon®, with Hyland’s Leg Cramps quick-dissolve tablets and ointment available at all 26 aid stations along the racecourse. Each year, the Hyland’s Boston teams have featured athletes based around a theme: an all-women team in 2017; a teacher team in 2018; a healer team in 2019; and a community builder team during 2020. Hyland’s also sponsors and brings a team of athletes to the California International Marathon, the St. George Marathon, selected races from the REVEL series, and the Hood to Coast Relay. Athletes from the various Hyland’s Powered teams are eligible to become Ambassadors.

During the first year of the ambassador program in 2019, the Hyland’s Powered athletes (known collectively as #OrangeCrush because of their iconic orange singlet) tackled some of the toughest races in the United States. These races included the Leadville 100, Western States, the Hard Rock 100, various Ironman races and century rides, and elite marathons including the Chicago Marathon, the Marine Corps Marathon, the New York City Marathon, and Boston. This year’s Ambassador Team had equally lofty goals for 2020, only to find the majority of their races canceled due to the COVID-19 pandemic. However, during the fall 2020 race season, the team hopes to tackle REVEL Big Cottonwood, the St. George Marathon, and CIM.

Hyland’s, Inc., a division of Standard Homeopathic Co., develops homeopathic medicines with the highest- quality natural ingredients, following the strictest standards of preparation*. With its commitment to excellence for over a century, Hyland’s consistently provides quality and integrity in every product. From Hyland’s Baby Nighttime Tiny Cold Syrup to Hyland’s Calms Forté, Hyland’s cares for families at every stage of life. Consumers can trust all Hyland’s products to be natural, gentle, effective, and safe for the entire family. For more information on products, visit www.hylands.com

*Claims based on traditional homeopathic practice, not accepted medical evidence. Not FDA evaluated.