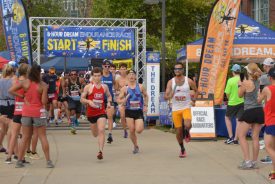 CARMEL, Ind. (July 19, 2022) /ENDURANCE SPORTSWIRE/ – A sold-out field stood at the start line of the 8-Hour Dream Endurance Race and Cat Nap 5K on Saturday, July 16 in Indianapolis with fresh legs and smiles, and ended the day with a combined total of 6,491.48 miles on those legs – and slightly weary smiles. Participants from 14 states took on heat, wind and humidity at the eighth annual event, held on the grounds of Butler University’s historic Hinkle Fieldhouse.

With a high of 91 degrees toward the end of the race, many took a more conservative approach with extra rest but still managed to hit high mileage in all categories. The results for SOLO and Team categories are scored based on the total distance covered during the eight-hour time frame.

Tian Wang, age 52 of Carmel, Ind., finally captured his first overall SOLO race win with 48.58 total miles, after several podium finishes in past 8-Hour Dream Endurance Race events. He is a member of the popular Indy Chinese Running Club, which had 16 participants in Saturday’s race.

Only .69 miles separated first and second place in the women’s SOLO race with Paige Woods, age 29 of Fishers, Ind., taking the top spot with 41.81 miles. Lauren Manuel, age 39 of Indianapolis, hit 41.12 miles for second place and added to her streak of eight straight podium finishes at the event.

The Team category, consisting of three divisions (female, male and coed), had a record number of entrants in 2022. The Roy Donk And The Colgate Comedy Hour team ran a total of 76 miles, the most of any group on Saturday. Eagle Creek Endurance Project Girls, team of runners aged 15 to 19, ran a total of 62.70 miles to take prize for the female 5-6 team division. The Snacks Run Club set a new course record for the female 3-4 team division at 62.01 miles. The Fishers Running Club ran a total distance of 71.51 miles in the eight-hour period to claim the RC Cup championship for the second year in a row, a special coed team division for nonprofit running clubs.

The event, one of one of CRRG Events’ signature races and the largest endurance running event in Central Indiana, offered long (3.1 miles) and short (1.89 miles) course loops on a combination of pavement and dirt towpath as well as “Bulldog’s Revenge,” an infamous hill on traditional trail surface. Runners and walkers had the opportunity to take a break in the tent village near the start/finish line, cool off with a snow cone from Fleet Feet, and plan their next stint on the course.

“It’s our participants – their camaraderie and enthusiasm – that make the 8-Hour Dream so special,” said Todd Oliver, race director and president of CRRG Events. “It’s great to see familiar faces, with one in three people returning year after year. Whether you’re toughing it out as a solo racer or enjoying the day with a team of friends, you know you’re going to want to come back for more.”

The event ended with award presentations complete with prosecco from Scarpetta, a cookout courtesy of the Carmel Lions Club, and the bluegrass sounds of Bahler’s Golden Age Band. Benchmark Physical Therapy provided much-needed sports massages and the Tom Wood Automotive Group beer garden was a popular spot for post-race beverages provided by Truly Hard Seltzer and The Boston Beer Company.

Results for the event include: