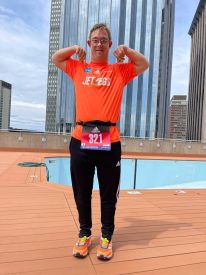 ATLANTA – January 11, 2023 /ENDURANCE SPORTSWIRE/ – Atlanta Track Club announced history making new addition to the 2023 Publix Atlanta Marathon Weekend: Chris Nikic, the first person with Down syndrome to complete an IRONMAN Triathlon, will run the Publix Atlanta Half Marathon as Runner 321 on Sunday, February 26. Nikic also plans to bring a whole team of athletes with disabilities from his Florida Special Olympics community to Atlanta. Additionally, with guidance from Nikic, Atlanta Track Club has added a category in registration specifically to accommodate neurodivergent athletes.

Runner 321 is an initiative powered by adidas and Chris Nikic’s team, aiming to improve inclusion in fitness for athletes with physical and intellectual disabilities. The message calls for all major marathons to hold bib #321 aside for an athlete with a disability. The number “321” represents trisomy 21, a genetic disorder caused by the presence of all or part of a third copy of chromosome 21, hence 3-2-1.

“When I was a kid, I rarely saw anyone who looked like me in mainstream sports,” Nikic said in an adidas campaign video about the initiative. “And now, we’re changing that.”

At just 21 years old, Nikic completed his first IRONMAN 70.3 Triathlon, which includes a 1.2-mile swim, 56-mile bike and running a half marathon (13.1 miles) in May 2020. He took it up a level by completing the IRONMAN 140.6 in November 2020, completing a 2.4-mile swim, 112-mile bike ride and running a full marathon (26.2 miles). The IRONMAN is known for being one of the most physically challenging and demanding sporting events an athlete can participate in.

Nikic was the first athlete with a disability to run as Runner 321 at the 2022 Boston Marathon. He ran the marathon in the previous year, but without the iconic bib number as it officially launched in March 2022 for World Down Syndrome Day. After he completed the 2022 race, he passed the bib onto the next Runner 321, Kayleigh Williamson, another athlete with Down syndrome and the first person with Down syndrome to complete the Austin Marathon.

“Inclusion in the running and fitness community, no matter what ability an individual has, is important to Atlanta Track Club and represents the values of Running City USA,” Rich Kenah, CEO of Atlanta Track Club, said. “We are thrilled to have Chris Nikic join us, and we’re more excited to offer this experience to more athletes with disabilities moving forward.”

This is just the beginning of Runner 321 at Atlanta Track Club’s events. After the 2023 Publix Atlanta Marathon Weekend, the Club will invite individuals with physical and intellectual disabilities to submit their interest in being Runner 321 at all events.