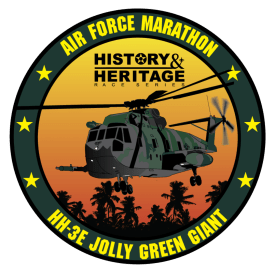 /ENDURANCE SPORTSWIRE/ – The HH-3E Jolly Green Giant will be the first retired aircraft to headline during the 2023 History & Heritage Race Series, powered by the Air Force Marathon, beginning Jan. 1

The upcoming event marks the first of six virtual races during the series third season. Registration for the event kicked off Dec. 1.

Each event is marked with its own historical aircraft vital to the Air Force’s past. All can be found in the National Museum of the U.S. Air Force.

“We are very excited to kick off the 2023 History & Heritage Race Series,” said Rachael Ferguson, director of the Air Force Marathon. “The series has been very widely received, and we are excited about the historic aircrafts that we will feature during this year’s races.”

The Air Force developed the Sikorsky HH-3E helicopter, nicknamed the “Jolly Green Giant,” to perform combat search and rescue to recover downed Airman during the Southeast Asia War. A highly modified version of Sikorsky’s CH-3 transport helicopter, the HH-3E carried both armor plating and armament to protect it from hostile forces during rescues of aircrews in a combat area.

Registration for each race is $30; however, for the first year, participants can bundle all six races for $170, a $10 discount.

Runners have the option to compete in the marathon, half marathon, 10K or 5K. Each participant may also run or walk the full distance at any destination of their choosing., Results may be uploaded using a GPS-tracking app that confirms time and mileage but this step is not required in order to receive your race packet.