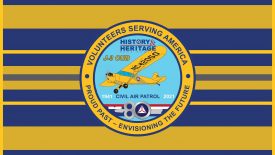 The upcoming event marks the first of six virtual races as the series returns for a second season.

While the Air Force Marathon, held annually the third Saturday in September, always features aircraft still in service, the History & Heritage Race Series was started in 2021 to highlight retired aircraft.

Each event is marked with its own historical aircraft vital to the Air Force’s past. All can be found in the National Museum of the U.S. Air Force.

“It is with great excitement that we are partnering with Civil Air Patrol to celebrate its 80 years of proud service to our country,” said Brandon Hough, Air Force Marathon director. “The J-3 Piper Cub has long been an instrumental aircraft in the success of Civil Air Patrol’s mission and thus a fantastic addition to the History and Heritage Race Series.”

The J-3 Cub is a symbol of CAP contributions to the Air Force. It was used by the Civil Air Patrol to hunt enemy submarines, report damaged ships, tow aerial targets and deliver integral war materiel.

The aircraft entered production in 1937 and continued manufacture until 1942. After Piper stopped producing the J-3, a new militarized version, the L-4, took its place. In 1939, almost 75% of trainers within the civilian pilot training program were J-3s.

A J-3C-65-8 is on display at the museum, painted with its infamous “Cub Yellow.” The longer abbreviation stands for the eighth model with a 65-horsepower engine. This aircraft had a range of 220 miles with a cruising speed of 73 mph; however, it could reach 87 mph.

Runners have the option to compete in the marathon, half marathon, 10K or 5K. Each participant may also run or walk the full distance at any destination of their choosing, as long as results are uploaded using a GPS-tracking app that confirms time and mileage.