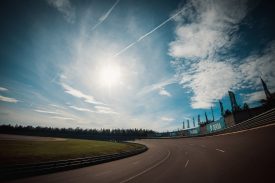 Sydney, Australia – 16th February, 2022 /ENDURANCE SPORTSWIRE/ – The Pho3nix Foundation is excited to confirm a date and venue for the Pho3nix Sub7 and Sub8 Project, powered by Zwift which will see Alistair Brownlee, Lucy Charles-Barclay, Kristian Blummenfelt and Nicola Spirig attempt to break seven hours for men and eight hours for women over the full distance of triathlon.

The audacious attempt will be held on either the 5th or 6th June 2022 (weather dependent) at the Dekra Lausitzring in Germany, an incredible racing complex and automotive proving ground used by Europe’s premier vehicle manufacturers, the German Touring Car (DTM) Championship series, and the Superbike World Championship.

The venue was chosen after an exhaustive global search for the fastest possible course which accounted for various factors including time zone, climate, wind, altitude, track surface and layout. Having taken these elements into consideration, event producers Mana Sports and Entertainment have determined that the Dekra Lausitzring will provide the optimum conditions for four of the most successful and decorated athletes in triathlon to write their names in the history books.

Talking about how the course will help achieve the goal of going Sub7 and Sub8, Alistair Brownlee said:

“The Dekra Lausitzring is designed for racing and speed, so it is the perfect location for us to attempt to break the mythical Sub7 and Sub8 barriers. Every element of the course needs to create optimal conditions for us to make gains and having a controlled environment to maximise results and minimise risk will be essential.”

For Lucy Charles-Barclay, the warm June temperature will play a pivotal role: “For me, the climate is really important as it will allow for an incredibly fast bike leg where the most amount of time can be saved. The calm water swim will also create an opportunity to start the challenge in the best possible way – fast – and that is what I want to do so I can not only beat Sub8, but also match the current men’s time of 7h21m.”

Kristian Blummenfelt echoed this by saying, “It will be great to race at a venue that is synonymous with speed andoffers the combination of optimal weather conditions and a quick, flat course.”

Talking about the course, Nicola Spirig added: “You have to have control over the environment. So, for example, having a flat course is very important to achieve a fast time – the ultimate goal.”

“This is an extraordinary attempt that requires everything to go right for our athletes. Having raced all over the world for three decades I know how important optimal conditions are to fast racing. Our attempt is about two key elements; speed and time. Dekra Lausitzring offers an unparalleled environment for our athletes to smash the barriers of human achievement and #DefyTheImpossible.”

The ground-breaking attempt, where the men are looking to shave up to 21 minutes off the current record and the women just over 18 minutes, will begin with the swim in nearby Lake Senftenberg: a 1,300-hectare man-made lake approximately 10 kilometers away from Dekra Lausitzring. The size of the lake facilitates a straight point-to-point swim course to minimise turns and maximise speed. On this 3.8-kilometer leg, the athletes will need to match the average world record pace over 1500m by swimming 100 meters every 1 minute.

The athletes will then transition to the bike course. Taking advantage of prevailing wind conditions on fast, open German roads to then blast into the Lausitzring’s 5.85km Test Oval, the track’s long straight stretches and no slow-speed turns will bear witness to the athlete’s support teams (pacers) swapping in and out on both the bike and run legs. The potential for significant gains is greatest over the 180-kilometer bike leg and the athletes will need to achieve an average pace of 45-50 kph, close to the maximum speeds maintained during the UCI Hour record, if they want to achieve the impossible.

With the swim and bike legs complete, the athletes now face the final hurdle – the marathon. Where races are often won or lost, and an athletes’ resolve tested, the last leg of the triathlon will be a 42.2km test of resilience and will power to see who can go Sub7 and Sub8. In order to achieve that, the athletes will need to average 5km, the popular distance run in parks across the world, in 20 minutes – more than eight times in a row.

To find out more about the Pho3nix Sub7 and Sub8 Project, powered by Zwift visit the official website at:https://www.sub7sub8.com/

The Pho3nix Sub7 and Sub8 Project powered by Zwift will set a new world standard of human physical achievement as we set out to do what many believe is impossible. Featuring the world’s greatest triathletes, the Pho3nix Sub7 and Sub8, powered by Zwift will deliver an unprecedented level of planning and world-best content and programming, engaging a global audience in this historic, sophisticated, audacious project that showcases human progress and inspires generations. The 18-month project will culminate with race day in June 2022. More information is available at www.sub7sub8.com.

The Pho3nix Foundation is a not-for-profit organisation created to promote physical activity as a way to improve the health and wellbeing of children, especially those from disadvantaged backgrounds.  Pho3nix Foundation’s flagship programs fall under the Participation, Progression and Performance pathway. The Pho3nix Kids program motivates and inspires children to participate in physical activity; Pho3nix Future is a mentoring and educational program supporting the sports careers and long-term development of young athletes; the Pho3nix Athlete Program aims to support athletes looking to qualify for an Olympic Games; and the Pho3nix Elite program (which includes the Pho3nix Team and Pho3nix Sub7 and Sub8, powered by Zwift) supports and promotes athletes reaching for the pinnacle of their sporting careers. More information is available at www.pho3nixfoundation.com.