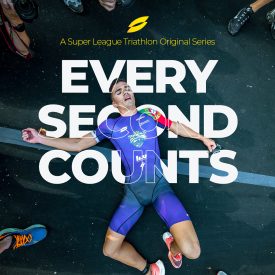 Episode 1: The Golden Quartet is available exclusively through Super League Triathlon’s YouTube channel. It tells the story of the four British Olympic gold medal winning heroes and their homecoming race in London to kick-off SLT’s 2021 Championship Series. Episode 1 is available via this link.

Every Second Counts is a groundbreaking documentary series from Super League Triathlon, told over four immersive episodes giving exclusive behind the access to the best athletes in the world as they battle for the Championship Series title over four back-to-back races in four different countries. With life changing amounts of prize money on offer, prestige and the chance to perform in front of huge global TV audiences, the stakes are high with drama at every turn.

Every Second Counts puts the sport of triathlon in front of a mainstream sporting audience in a way that has not been seen before.

Super League Triathlon Co-Founder and CEO, Michael D’hulst, said: “The release of Every Second Counts is a big moment for triathlon and the journey of evolving it from a participation sport into a spectator experience with mainstream appeal. If you looked at sport 10-20 years ago it was purely about the event or match. But now people are curious and they’re used to seeing more. There’s a 360-degree view to everything that’s involved with sport.

“Every Second Counts is the pinnacle of showcasing triathlon and being part of what sport currently is. It’s also the future. For an athlete it is a great opportunity to showcase their lifestyle and what goes into their incredible performance, to allow a deeper understanding of what is behind that one moment, and share that with the audience and the fans.”

Olympic gold medallists Georgia Taylor-Brown and Alex Yee were among those who attended the glitzy premiere of the series in London last week.

Georgia Taylor-Brown said: “It is so good. It is so dramatic and I got goosebumps at points. Everyone only sees us on the race course and the nerves and the drama around all of that so it is nice for people to see us behind the scenes. The interviews we did straight after the races so the emotions were still there so it gives a good insight into us outside of the race course.”

Alex Yee said: “It’s really cool that our sport has been put on this platform. Super League has done an amazing job with it and it looks incredible.”

The four episodes will be officially released over the coming weeks and will initially be exclusive to Super League Triathlon’s YouTube channel before wider international broadcast: