Gourdy’s Pumpkin Run: Virtual Raises Near Quarter of a Million Dollars for Girls On The Run

The fall-themed 5K closed out their biggest season yet with $230,472 in donations.

NEW YORK – Gourdy’s Pumpkin Run, the popular and award-winning fall race, raised over $230,000 for Girls on the Run in the first year of their partnership together. Gourdy’s had an initial goal of raising $50,000 for the nonprofit through the Virtual Run, but was able to raise this goal multiple times throughout the season. Girls on the Run received $1 per participant since signing on with the event in May. The remainder was achieved through additional donations made directly while registering, and individual fundraisers set up by Gourdy’s participants through the Empowerment Patch. The Empowerment Patch, Gourdy’s unique fundraising program, allowed participants to earn their registration fee back, in addition to other exclusive swag, for reaching fundraising milestones.

In regards to the successful partnership, Liz Wian, Vice President of Partnerships and Development for Girls on the Run, noted, “Girls on the Run is honored to serve as the national partner for Gourdy’s Pumpkin Run. The momentum and commitment of this community served as a source of inspiration and strength for our organization during a year where it could not have been needed more. The shared alignment to our mission is undeniable. Now more than ever, the skills girls learn in Girls on the Run, those of resiliency, confidence, and connectedness, are so critically needed and thanks to the generous support of Gourdy’s Pumpkin Run and their amazing community of participants, more girls will have access to our life-changing programs. For us, the finish line is just the beginning, and we look forward to continuing to build on this partnership for many years to come. Fall has certainly become our favorite season and we are so grateful to the entire Gourdy’s Pumpkin Run community!”

“We are so thrilled with the outcome of this partnership! When we signed on to work with Girls on the Run, we set goals together, but did not know what to expect, as it was our first year together. When our in-person events were cancelled, we were initially worried about how that may impact donations. But as you can see, our community came through! The Gourdy’s Pumpkin Run community is so engaging, thoughtful, encouraging, and motivated. I think the high engagement rates we had with our participants, and their engagement across their own platforms, helped lead to these registration numbers and the donation amounts we’re seeing” added Sour Fish Events Co-Founder, Courtney Young.

Sour Fish Events has been hosting the fall-themed 5K since 2012, and after cancelling all 21 planned in-person events due to the ongoing COVID-19 pandemic, Gourdy’s broke their own participation record for their 9th season. With over 71,000 participants registered for this year’s Virtual Run, Gourdy’s improved on last year’s 68,000 participant season, which included both location-based events and the Virtual Run. Gourdy’s Virtual Run has been offered since 2016, but with the circumstances surrounding the COVID-19 pandemic, 2020 allowed for Gourdy’s to expand their virtual numbers, and offer their virtual experience to a significantly wider audience. Sour Fish Events plans to continue building upon the unique experiences this year offered to make for an even better 2021 season for Gourdy’s Pumpkin Run. For more information on Gourdy’s Pumpkin Run, you can visit www.gourdyspumpkinrun.com.

About Girls on the Run

Based in Charlotte, N.C., Girls on the Run is a nonprofit organization with local Councils in all 50 states. Founded in 1996 with 13 girls, Girls on the Run has now served 2 million girls. Over the course of the 10-week program, girls in 3rd-8th grade develop essential skills to help them navigate their worlds and establish a lifetime appreciation for health and fitness. The program culminates with girls positively impacting their communities through a service project and being physically and emotionally prepared to complete a celebratory 5K event. Girls on the Run is included as a top research-based program in a Social-Emotional Learning Guide developed by researchers at Harvard University and has been recognized by the National Afterschool Association (NAA) as one of the most influential after-school programs.

Gourdy’s Pumpkin Run, formally The Great Pumpkin Run, is a 5K run that has taken place on farms, and in many major cities throughout the Midwest, East Coast, and South for the past 9 years. Runners receive a glass of apple cider and a pumpkin at the finish line, where they celebrate the best of the fall season with their friends and family. Gourdy’s Pumpkin Run also has a Virtual Run, wherein participants are able to complete the 5K and enjoy fall festivities within the comfort of their own neighborhood, on their own time. 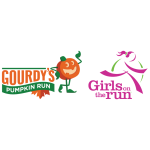