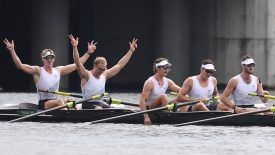 As lockdowns and travel quarantine have become the new normal in the international sporting world, leading athletes have been forced to seek out innovative ways to maintain their high-performance training regimes and body maintenance.

In preparation for this year’s Olympic Games, getting treatments for warm-up or recovery physiotherapy was often limited to a Zoom session. Add to this the stress of being in travel quarantine and it’s clear that many athletes were forced out of their comfort zone, with  stark changes to their routines.

For New Zealand’s Olympic athletes, sessions were often hampered by unpredictable lockdowns, forcing the athletes to develop greater self-reliance for their training regimes.

“In the weeks headed into the Olympics we were on the road, separated from our training staff, so another lockdown isn’t anything new from a training perspective”, said Tom Murray, who won Gold with the New Zealand rowing team in Tokyo.

Thankfully, wearable technology Myovolt provided an innovative solution for these athletes, enabling them to continue pushing themselves to the limit, knowing they can recover effectively and safely in any environment, whether it’s a hotel room or even on the bus.

“I would strap Myovolt on, then get on with my morning. Regularly turning it on before breakfast, and not take it off until I had finished my warm-up”, says Tom.

“Especially during my time on the road, I personally really leaned on my Myovolt to help with my recovery between sessions. It’s much the same as I try to maintain fitness during these lockdown periods,” said Murray.  “Myovolt was pretty much the only tech tool I was using for my body. I’ve found it incredibly helpful as a preventative measure when I’m going through tough training weeks and used it daily in the build up to the Olympics”.

Myovolt, used by the NZ Olympic rowing team to help them prepare, warm and recover allowed them to perform at a very high level in Tokyo where the team achieved a record three Gold and two Silver medals.

“With limited staff headed away with our Olympians, Myovolt has become a mobile stop-gap to make sure athletes are still able to get daily high level treatment”, Dr Armstrong says.

“Myovolt’s portability has ultimately been one of the big things to win athletes over. As some of the world’s top athletes, they’re getting offered novel tools all of the time. I can say that Myovolt is the only real ‘new’ technology being used by these sportspeople”, says Stuart

For the founders of Myovolt, this is the second time they have built wearable technology to support Olympic medalists, after creating the technology behind the “hot pants” used by the British and Australian Olympic cycling teams at the 2012 London and 2016 Rio games, resulting in more than 17 Gold medals.

“We developed Myovolt specifically for athletes to get physio-level musculoskeletal (MSK) treatment anytime, anywhere, and the portability was key. We wanted the athletes to get muscle warm-up, injury treatment and movement prep during the restrictive travel and lockdown environments at Tokyo 2020”, said Steve Leftly, Founder at Myovolt. “Lots of confinement or travel can really increase stiffness or compound musculoskeletal issues and Myovolt can give the athletes treatment wherever they are without a physio being there.”

The technology was also used by the New Zealand Paralympic wheelchair rugby team in Tokyo. Cody Everson, Captain of the NZ Paralympic rugby team has been using Myovolt for several years, and traveled to Tokyo with it where it played a big part in his recovery. “We had a lot of downtime in the village, Myovolt was great to have with me in my room to do my own recovery processes away from the team environment”, said Everson.

But Myovolt is not limited to Olympic gold medalists, it’s also widely-deployed among clinicians, physios, trainers and anyone who needs muscle recovery or rehab. “We’re trying to help anyone with MSK or mobility issues with this technology, so it was great to have both Olympics and Paralympics athletes using it in Tokyo”, says Dr Dianne Jones, CTO and Founder at Myovolt.

Myovolt is world-leading wearable movement recovery technology, clinically proven to provide up to 3x faster muscle recovery after sport or physical activity. By promoting circulation and stimulating blood flow, Myovolt reduces muscle stiffness by up to 70% in just 10 minutes and dramatically reduces MSK soreness. Learn more about at www.myovolt.com.

View all Releases by myovolt