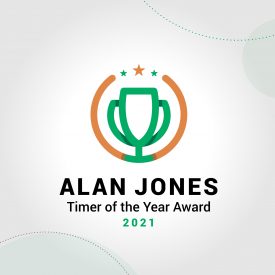 December 2, 2021 – Moorestown, NJ /ENDURANCE SPORTSWIRE/ – GiveSignup | RunSignup is seeking nominees for the annual Alan Jones Timer Award. RunSignup’s annual timer award recognizes an individual race timer who has shown exceptional efforts and has had a significant impact on the endurance race industry. As the backbone of the race industry, timers have the opportunity to guide race organizers toward innovation and to transform the experience for participants and spectators. Named in honor of Alan Jones, a highly regarded foundational innovator in the endurance racing and timing community, the Alan Jones Timer Award acknowledges those who have proactively improved the race experience. Selection for the Alan Jones Timer Award is based on nominations received and the award will be presented at GiveSignup | RunSignup’s Winter Symposium in January, 2022.

“I am really pleased to continue to be part of this effort to honor our timers. This industry has had a tremendous impact on my life and on the lives of countless others. The efforts of timers can sometimes be overlooked or just expected and this is an opportunity to shine some light on those that work so hard to create positive experiences for many,” said Alan Jones, Founder of RunScore and Inventor of the Jones Counter.

Nominations for the Alan Jones Timer Award can be submitted to info@runsignup.com. Submissions should include the timer’s name, company name, and an explanation, including specific examples of the impact the nominee has made on a specific race, the participant experience, or the industry as a whole. The winner of the Alan Jones Timer Award will be announced at RunSignup’s Winter  Symposium to be held January 25-26, 2022, in  Orlando, Fla.  The awarded timer will receive an award plaque with a mounted Jones Counter and travel expense coverage to attend the symposium. Nominations for the 2022 Alan Jones Timer Award are due by December 31, 2021.

“We introduced the Alan Jones Timer Award to recognize those in the industry who, like Alan, have made lasting and wide spanning impact on the industry. Timers are the unrecognized change agents in the industry – which has most recently been demonstrated with their ability to pivot and respond to the challenges Covid-19 brought to the industry. I’m looking forward to receiving the nominees and bringing awareness to this essential and dedicated group of individuals,” said Bob Bickel, Founder and CEO of GivenSignup l RunSignup.

Alan Jones has significantly propelled change within the endurance community starting with his first scoring a race in 1970 in real-time with a terminal connected to an IBM Mainframe.  Jones invented the eponymous Jones Counter in 1971 to measure courses accurately. In 1973, at age nine, his son, Clain Jones, began manufacturing and distributing the Jones Counter. The device has since had a profound and lasting effect on the industry. The Jones Counter continues to be the industry’s standard measuring device for courses and is used for all official USATF and IAAF course certification and Olympic marathons. His premier scoring software, RunScore, first debuted in October 1985 and has since provided results to more finishers than any other software in the industry. In addition to these contributions, Jones developed and maintained age grading with Rex Harvey of the World Masters Athletics and has worked to improve the sport at every level as a runner, race director, timer, running club president, and innovator throughout his life.

GiveSignup | RunSignup is the fundraising event platform leader delivering the art of technology to nonprofit organizations. Over 10,000 nonprofits, supporting more than 25,000 events, use our free and open platform to raise more than $1 billion, grow their events, and save time. This purpose-built platform gives nonprofits the technology needed to generate revenue and engage supporters. Our expertly crafted, open and all-in-one solution powers nonprofit revenue generation and supporter engagement with everything from ticketing and registration to donations and fundraising. No subscriptions, no plans, no monthly fees.

To find out why customers like such as American Cancer Society, AACR, IRIS and Semper Fi Fund use GiveSignup | RunSignup, visit www.givesignup.org.

View all Releases by runsignup