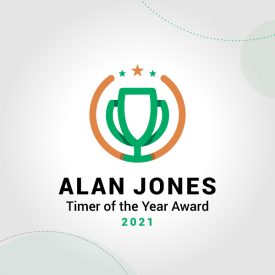 January 20, 2022 – Moorestown, NJ /ENDURANCE SPORTSWIRE/ –GiveSignup | RunSignup announces the 2021 Alan Jones Timer Award winner, Mary Anderson, founder of Anderson Race Management located in Eagan, Minnesota. The Alan Jones Timer Award recognizes an individual race timer who has shown exceptional efforts and who has had a significant positive impact on the endurance race industry. Anderson’s 28 years in the industry demonstrates a steadfast focus on the endurance space where she has played a fundamental role in responding to the shifting forces and trends in the industry. Anderson’s race management company now serves 200 events a year throughout the Midwest and provides comprehensive race management services in addition to timing and scoring events. Her dedication to the industry is also demonstrated in her role as an active board member of Minnesota Festival and Events Association and the Twin Cities in Motion Race Committee.

“I’ve known Mary for many years and remember our both attending conferences back in the 90s. She has helped drive many of the progressive changes the industry has faced since its early days with tagging participants and has been a long-time RunScore timer.  I’m very honored we are able to recognize her dedication and positive impact she has had on the industry”, said Alan Jones, Originator of the Jones Counter, RunScore, and age-based grading.

Some of the more noteworthy changes Anderson has encountered during her tenure in the industry include the transition from tag timing to chip timing, expanding services beyond timing to better meet the needs of events, and immediate published results. In addition, Anderson reports the shift towards events having a non-profit or fundraising function that began in 2007 helped to propel the increase in running and walking events throughout the country. Anderson viewed each of these changes as positive progression and embraced the adoption of  new technologies, business practices, and processes that came with each transformative development. Most recently, Anderson has played a pivotal role in bringing together government regulators and regional event organizers to navigate the challenges associated with Covid-19.

“We created the Alan Jones Timer Award  to recognize the foundational importance and influence timers provide to the endurance community and races. Mary’s longevity and success in the industry is an inspiration for other timers. She provides an example of how important it is to embrace change and innovation as a method for improving one’s timing business and for ensuring customers and races they serve are successful. I’m very pleased we are able to recognize her with this award,” said Bob Bickel, Founder and CEO of RunSignup and GiveSignup.

Mary Anderson’s interest in the running industry began as a hobby and in 1994 she added race timing and management to her accounting skills to begin a career in timing by timing her first event with 2,500 participants. She established Anderson Race Management in 1996 and since then she has grown the Anderson Race Management business to provide comprehensive race management and timing services for 200 events throughout the Midwest in addition to producing her own Chocoholic Frolic race series. Anderson Race Management’s event services include timing and scoring, publishing results, event management, course logistics, marketing and promotion services, and equipment rental. She has served on the Board of Directors for the Minnesota Distance Running Association, Girls on the Run, People for Parks and the Twin Cities in Motion.  She has also served on numerous Twin Cities in Motion race committees for 31 years. Race organizers interested in finding out more about the services offered by Anderson Race Management, can contact Mary Anderson here.

About the Alan Jones Timer Award

RunSignup’s annual Alan Jones Timer Award is intended to recognize an industry race timer who has made a significant impact on improving the race community. The award is named in honor of Alan Jones, who is an acknowledged innovator and is most known for his creation of the Jones Counter, age-based grading, and RunScore. As the backbone of the race industry, timers have the opportunity to guide race organizers toward innovation and to elevate the experience for participants and spectators. Selection for the Alan Jones Timer Award is based on nominations received that illustrate a race timer who has shown exceptional efforts to improve the industry.

GiveSignup | RunSignup is the fundraising event platform leader delivering the art of technology to nonprofit organizations. Over 10,000 nonprofits, supporting more than 25,000 events, use our free and open platform to raise more than $1 billion, grow their events, and save time. This purpose-built platform gives nonprofits the technology needed to generate revenue and engage supporters. Our expertly crafted, open and all-in-one solution powers nonprofit revenue generation and supporter engagement with everything from ticketing and registration to donations and fundraising. No subscriptions, no plans, no monthly fees.

To find out why customers such as American Cancer Society, AACR, IRIS and Semper Fi Fund use GiveSignup | RunSignup, visit www.givesignup.org.

View all Releases by runsignup