GFNY Florida Sebring: a hattrick – and an attempted escape from USADA 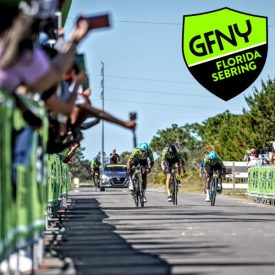 After a string of attacks from the gun, it was at mile 20 when a group of six riders, including double GFNY Florida Sebring Champion Leon Santamaría (Colombia), Felipe Aros (Chile) and former Israel Cycling Academy pro Luis Lemus (Mexico), successfully got away from the peloton. Working well together, they extended their lead first to a minute where it stayed a long time, and later to as much as three minutes.

With 20 miles to go, Lemus suffered a puncture and the group was down to four. Attacks started and while no one was able to escape, the peloton came as close as 90 seconds again. In the four man sprint to the line Santamaría again took the win in 3:44:05 ahead of Gary Hand (United Kingdom) and Felipe Aros.

At the finish, however, there was a controversy during the antidoping controls administered by USADA: fourth place finisher Elias Montañez Barros (Merida, Mexico) sprinted away faster from the antidoping chaperone than to the race finish. After a hectic chase, he was found in his car, changed and ready to leave.

First he pretended to be someone else but his wristband identified him. He then was brought to the USADA testing tent where he was explained the consequences of declining to be tested: a four year racing ban. Yet, he refused to get tested and walked off. In addition to his global racing ban of four years, he received a lifetime ban from racing any GFNY.

“IC testing is often dubbed an ‘IQ test’. But it also means that athletes have to microdose or stop taking drugs earlier before the race. Add to that the performance detrimental anxiety of actually testing positive. Half times of drugs aren’t an exact science because they depend on the athlete’s metabolism and factors like hydration. All this forces a doper to take less drugs. And if they don’t expect to get tested at all – like Montañez Barroso – then IC testing is obviously as effective as out of competition testing.

OOC testing remains a key pillar of GFNY’s antidoping strategy since 2012. GFNY keeps exploring ways to keep its races as clean as possible. The vast majority of riders race clean and deserve this effort.

GFNY has been testing bikes for motors since 2017. All checked bikes at GFNY Florida Sebring had no motor.

Saturday’s second GFNY Marathon Florida was held on a lightening fast course. Officially measured, it’s a qualifier for the Wanda Age Group Marathon World Championships in 2023 as well as the Boston and NYC marathons. Temperatures in the 50s were unseasonably cool yet ideal for racing. Americans Nikki Criscuolo and William Conley won the race.

Next up on the GFNY calendar is GFNY Panama City which will take place on Sunday, October 30, 2022.

30 plus events around the world. View the latest calendar here