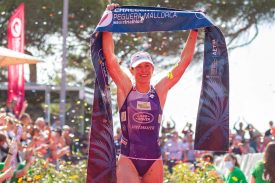 The day started with a calm swim in perfect conditions and Lucy Hall (GBR) showed her dominance in the women’s race, catching the back markers of the pro men, despite starting three minutes later. She exited the swim in first place in 25:31, a minute ahead of a large group that included Jodie Stimpson (GBR), Luisa Baptista (BRA), Imo Simmonds (SUI) and Spirig.

Hall rode solo all day with all the action in the chase group behind her where Spirig quickly took control. Spirig was joined by Simmonds, Stimpson and India Lee (GBR) who jostled for position with Spirig dominating until the later third of the ride when Simmonds made her move to the front of the chase group.

Hall came off the bike with a clear two-minute lead and it seemed that victory could be in her sights but Spirig was always going to be a threat. By the start of the third lap, the pair were running side by side and before long Spirig had put over a minute into Hall whose dominating ride started to take its toll. Spirig went on to take the win in 4:14:43. On the final lap Simmonds also overtook Hall for second place in 4:15:58 with Hall eventually taking third in 4:16:42 – her third podium in as many weeks after a win in CHALLENGEBUDVA-MONTENEGRO and third in CHALLENGESALOU.

Spirig said she really enjoyed racing in front of the Mallorca crowd on an island she loves. “I was really happy I could combine a holiday with family, a training camp and racing here. It’s a great place, I really enjoyed the race and it’s great to come away with a win. I had to give everything on the bike as Lucy and the others were riding really strong and then I was going out on the run really fast so I was dying a bit on the second half but it was a good challenge to run Lucy down!”

The men’s race was more of a power struggle with Sylvain Fridelance (SUI) and Noah Servais (BEL) exiting the swim neck and neck in 23:43, closely followed by Collin Chartier (USA). However, the first steep climb on the bike changed everything when strong bikers Funk, Magnus Ditlev (DEN), Chartier, Nils Frommhold (DEU) and Gregor Payet (LUX) caught up with the fast swimmers and the race was on. Ditlev was setting the pace before a mechanical took him out of the race for just a short while. With Ditlev temporarily out of the mix, it was a battle of the German bikers with Funk and Frommhold taking charge and showing their skill on the technical course with its steep downhills and testing climbs. Behind them Chartier and Payet dropped off the pace slightly, allowing Ditlev to catch them up. It was Chartier and Ditlev who came into T2 in third and fourth, about three minutes down on the leaders and it was all on in the run. Funk set off with a blistering pace which never faltered, which was fortunate as behind him Chartier once again proved he is a force to be reckoned with on the run. With Funk taking the win in 3:45:50, Chartier was just seconds behind him in 3:46:29 while Ditlev proved even a mechanical wasn’t going to stop him to take third in 3:47:07.

“Oh my god, I can’t tell you how relieved I am!” said Funk. “I felt today I could show my potential. I felt really good from the beginning, I was really flying. I think this was probably my best half distance performance I have ever done. The run was really hard and it took everything out of me but I couldn’t let Collin catch me! Thanks to everyone for cheering for me, it was really fun today!”

Over 1,300 athletes competed at the triathlon spectacle that is CHALLENGEPEGUERA-MALLORCA, set on the golden beaches and forested hills of the south west of the island with events including the Challenge Women run, Junior Challenge as well as the international middle distance race.

Not a Prank: The Cutoff for the 2022 Boston Marathon is 0 Minutes and 0 Seconds