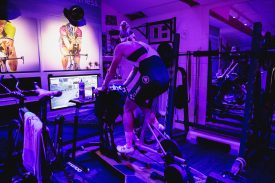 Sydney, Australia – 24th November, 2021 /ENDURANCE SPORTSWIRE/ – The Pho3nix Foundation and Mana Global is today pleased to announce Zwift, the industry-leading virtual cycling and running fitness platform, as presenting partner for the Pho3nix Sub7 and Sub8 Project Powered by Zwift, which will see Alistair Brownlee, Lucy Charles-Barclay, Kristian Blummenfelt and Nicola Spirig attempt to break seven hours for men and eight hours for women over the full distance of triathlon.

“We are delighted to be a part of this extraordinary event and support these athletes on their journey,” says Eric Min, Zwift CEO and co-founder. “We’re immensely proud that so many of the world’s professional triathletes choose to train on Zwift. In this event every second will count towards breaking the ambitious targets. We are confident that Zwift will play a significant part in helping the four athletes to achieve their goals whilst having some fun along the way.”

Mana’s CEO and two-time IRONMAN® World Champion Chris McCormack, says: “In the past year especially we’ve seen how training on Zwift is so valuable not just for amateurs but also professionals to train consistently, safely, and still with that social aspect that is integral to making sport enjoyable. The Pho3nix Sub7 and Sub8 Project Powered by Zwift is an extraordinary attempt that requires everything to go right for our athletes. Getting the training right is key, and our partnership with Zwift makes that possible.”

The Pho3nix Sub7 and Sub8 Project Powered by Zwift represents the marriage and control of every conceivable variable to deliver the fastest time humanly possible. This is not just a race. This is the chance for a place among the pantheon of sporting greats. A chance to become a household name. A chance to be the fastest.

For Brownlee, Zwift has transformed indoor riding for the dual Olympic Gold Medalist      known for riding outdoors even in unfriendly conditions. “It’s no secret that I much prefer riding outside when I possibly can, but I think that Zwift has changed it from something that I really don’t like doing to something that I find quite fun because there’s a competitive element of racing other people all around the world. For some reason it gets the most out of me in that competitive situation. Whether it’s me as a professional athlete and it encourages, inspires, and motivates me to do physical activity, or someone who gets inspired to do the hour of cycling before work or that hour on a weekday evening — I think Zwift does that, so I think that is genuinely awesome.”

Zwift has always been a major component of Charles-Barclay’s training from her days as an amateur all the way to becoming Ironman 70.3 World Champion. She says, “I’ve been an avid user of Zwift since very early on into my triathlon training. I do live in a very busy area near London, so a lot of my training is done indoors. I can ride with other athletes, I can make group rides, so if I want to ride with my friends during the lockdown, we all ride on there together. I love that Zwift is coming on board.”

Blummenfelt won his Olympic gold medal and world title off the back of marrying hard work and precision training through technology like Zwift. He says, “You can get so much more out of your threshold session by being on Zwift and also kind of the community they have there. Even though you’re riding by yourself in your basement, you can still feel like you’re riding with your mates from Spain and France and all around the world. You feel that you’re a part of something more than just riding for yourself.”

To find out more about the Pho3nix Sub7 and Sub8 Project Powered by Zwift, visit the official website at: https://www.sub7sub8.com/

About the Pho3nix Sub7 and Sub8 Project Powered by Zwift

Mana stands for power and prestige, with an unparalleled network and credentials in the wide world of sports and entertainment. We deliver our projects, programs and services with pride, boldness and authority. Led by two-time Ironman World Champion, Chris McCormack, the Mana team has been responsible for some of the most important innovations in triathlon, including Super League Triathlon, the Bahrain Endurance 13 Team, and now the creation and delivery of Pho3nix Sub7 and Sub8 Project Powered by Zwift. More information is available at www.manaseg.com.

The Pho3nix Foundation is a not-for-profit organisation created to promote physical activity as a way to improve the health and wellbeing of children, especially those from disadvantaged backgrounds.  Pho3nix Foundation’s flagship programs fall under the Participation, Progression and Performance pathway. The Pho3nix Kids program motivates and inspires children to participate in physical activity; Pho3nix Future is a mentoring and educational program supporting the sports careers and long-term development of young athletes; the Pho3nix Athlete Program aims to support athletes looking to qualify for an Olympic Games; and the Pho3nix Elite program (which includes the Pho3nix Team and Pho3nix Sub7 and Sub8 Project Powered by Zwift) supports and promotes athletes reaching for the pinnacle of their sporting careers. More information is available at www.pho3nixfoundation.com