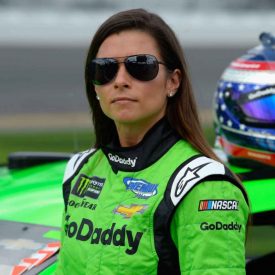 Since retiring as a professional motorsports driver three years ago, Danica Patrick has continued to take on big challenges. This includes everything from bungee jumping to skydiving to eating a scorpion, to name a few.

“I realized when I was done racing that one of the things I enjoyed the most about doing it was getting out of my comfort zone,” says Danica.

On her bucket list was to run a marathon, so when she was presented with the opportunity to race the 2021 Boston Marathon, she jumped at the chance.

“I like running, so at first I thought I’d be able to do a marathon even without training because I’m strong mentally,” says Danica. “As the runs got longer, that’s when it hit me that I really needed to put the miles in.”

Danica trained for Boston with her sister Brooke and her good friend Erin, who are all running the marathon on behalf of The Light Foundation. As the training picked up, she turned to her sister, an avid runner, for recommendations on nutrition and that’s how she found UCAN.

“I’ve realized first-hand how important nutrition and fueling are to feeling good and being able to perform your best,” says Danica. “Since it’s my first marathon, I really want to make sure whatever I put into my body agrees with me. UCAN has become a critical part of my workouts to ensure I have long-lasting energy and focus through the very end of my run.”

The recommended marathon nutrition strategy is to fuel with UCAN Energy Powders 30 minutes pre-race and replenish energy levels with one pouch of UCAN Edge every 45-60 minutes during the race. While many athletes today fuel with sugar-based energy products such as sports drinks and gels, the emphasis on quick energy requires continuous supplementation to rescue the body from crashing. The spike and crash in energy and frequent re-fueling with sugar can leave athletes prone to bonking and stomach issues.

Alternatively, athletes who use UCAN products benefit from the steady-release of energy from SuperStarch, the patented, complex carbohydrate that’s unique to UCAN and delivers long-lasting energy without a spike & crash and with less frequent re-fueling compared to sugar.

Danica recently spoke with 4x U.S. Olympian & Boston Marathon winner Meb Keflezighi on her podcast.  Meb relied on UCAN to fuel the most impressive victories of his career and kept him running strong into his 40s. He’s a strong believer in UCAN’s unique way of delivering energy, both for elite athletes and people running for health and fitness.

“UCAN is a game-changer for energy and recovery,” says Meb. “I wasn’t worried about rescuing my body from a crash, instead I had consistent energy levels that allowed me to focus on running, not fueling.  Being able to have energy without sugar really made a big difference for me, especially later in my career.”

Whether you’re a first time marathoner like Danica, or one of the greatest of all-time like Meb, the benefits of maintaining stable blood sugar with UCAN are applicable to runners of all levels. Stable blood sugar is key for athletic endurance, focus, recovery, body composition and overall metabolic health.

Danica’s goal for her first marathon is to finish the race in under 4 hours, but she’s also keeping things in perspective given the unpredictable nature of the marathon.

“Just physically being able to run 26.2 miles says a lot about who we are and how we take care of ourselves.”

Based in the US, UCAN is a company obsessed with the science of health and performance. UCAN enables athletes to gain confidence in their inherent abilities to surpass their performance by unlocking their body’s full potential through smart nutrition. UCAN products utilize SuperStarch®, a patented, slow-releasing complex carbohydrate that delivers steady, long-lasting energy without triggering an insulin response. Originally created for a child with a rare metabolic disorder, UCAN Energy Pouches, Powders, Energy Mix and Energy Bars are trusted by over 80 colleges, 40 pro teams, Olympic marathoners, elite triathletes, cyclists, group fitness coaches, thought leaders in health and performance, boxers, and recreational athletes for foundational nutrition to unlock performance. Learn more at ucan.co, and get the latest news in the UCAN world by following @GenUCAN on Facebook, Instagram and Twitter. UCAN nutrition products are currently available in powder, pre-mixed, energy mix, and bar formats, in a variety of flavors, at 350+ specialty run, bike and tri stores around the country, Lifetime gyms, and can be purchased online at ucan.co or on Amazon.

As a racecar driver, Danica Patrick broke barriers and set records with her on-track performance. With her racing career behind her, Danica looks to her next chapter as she focuses on her passions: good food, great wine, fitness and helping others achieve their goals. Danica joined the mainstream ranks by succeeding in the male-dominated world of professional motorsports. Danica was named to TIME’s “100 Most Influential People” list, has graced the cover of many prestigious publications and was featured in pictorials in the 2008 and 2009 Sports Illustrated Swimsuit Issue. She has appeared in a record-setting 14 Super Bowl commercials, 13 of which were for longtime partner, GoDaddy! She hosts the Pretty Intense Podcast, with new episodes every Thursday.